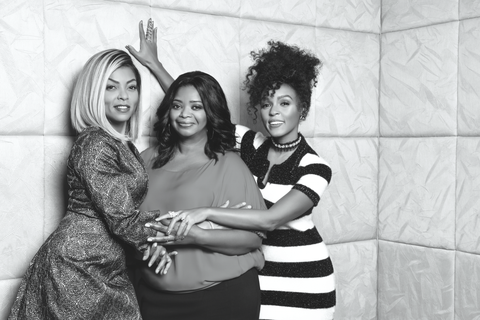 Superheroes have all kinds of special powers. Some can fly. Some have kinetic abilities. And others can send men into space with their brainpower. That's right: From the 1940s through the 1980s, a group of as many as 80 African-American female mathematicians, engineers, and scientists at NASA (known as the "West Computers," a reference to the segregated west side of the Langley Memorial Aeronautical Laboratory in Hampton, Virginia) pushed their cat-eye glasses back and looked up toward the cosmos, where their mathematical capacity—not to mention the quiet, steely determination to transcend institutional and social barriers around race and gender—carried a man into outer space, landed another on the moon for the first time, and saved three others aboard the Apollo 13 spacecraft from crashing onto the Earth's surface, just to name a few of their superhuman accomplishments.

As Margot Lee Shetterly writes in her September New York Times best seller, Hidden Figures: The American Dream and the Untold Story of the Black Women Mathematicians Who Helped Win the Space Race (William Morrow): "Their goal wasn't to stand out because of their differences; it was to fit in because of their talent."

"Had I known, maybe I would've dreamed of becoming a rocket scientist." —Taraji P. Henson

So who are these women, the ones whom actress Taraji P. Henson describes as "superheroes without capes"? Based on Shetterly's book, Hidden Figures (20th Century Fox), in theaters in January, tells the story of NASA mathematicians Katherine Johnson, Dorothy Vaughan, and Mary Jackson, black women whose contributions to America's space-race efforts launched astronaut John Glenn (played in the movie by Glen Powell) into the cosmos in 1962, the first American ever to orbit the Earth. The film is directed by Theodore Melfi, with an original soundtrack by Pharrell Williams. It's the kind of story you'd expect to know already, names you'd hear recited as answers to the $200-level questions on Jeopardy!.

"I actually thought this was a work of fiction," Spencer says. "I've seen footage from that era, and there weren't any women anywhere in sight." The Academy Award winner plays Vaughan, the interim supervisor of the human computers (as in, women who calculated the math that had literally never been done before that built NASA's aircraft and kept them from falling back to Earth). In the film, Vaughan fights for the official title of supervisor, a distinction she's denied (despite already doing the work) by other (read: white, male) departments. Vaughan, whom Spencer describes as "mechanically inclined," went on to work with the first IBM computers at NASA, dismantling them to teach herself the wiring. "Let me just tell you right now," Spencer says, "I would never be able to do what she did. I can't even put Ikea furniture together."

When Henson read the script, she was upset. "I just remember being very angry," she says, "because had I known, maybe I would've dreamed of becoming a rocket scientist. I wasn't good at math and science—that's why I'm an actress." Henson plays Johnson, the now 98-year-old woman who was part of the team responsible for calculating the trajectory for the first American in space in 1961. Later, Glenn requested that the ultra-capable Johnson personally recheck the calculations that would send him into orbit. "Katherine is a living hero," Henson says. "That must be some kind of power to know that you sent men where no men have gone."

Not that any of the women were thinking about that. "I don't think they knew that they were making history," Monáe says. This is Monáe's first starring role in a major feature film. (She also starred in this fall's indie drama Moonlight.) But acting is nothing new for the Grammy Award–nominated singer, who studied drama at the American Musical and Dramatic Academy in New York. In Hidden Figures, Monáe plays Jackson, the first African-American female engineer at NASA. "They were doing their job," Monáe says. "They came in every day wanting to be respected as hard workers, to prove themselves as brilliant-minded women." Henson agrees: "When you're in it, you don't know that you're making a change. You're just doing it, and then you look up and you're 98 and the president is giving you all kinds of medals. You're like, What? I just did my job." Johnson was awarded the 2015 Presidential Medal of Freedom last November.

These women also changed our understanding of what humankind is capable of—without a pat on the back. Still, there's the question the actresses will inevitably be asked in press junkets: How does this film fit into the conversation about diversity in Hollywood? "I think it's an inane question," says Spencer. "Here's my feeling on it: People have totally reduced the conversation about diversity to mean black and white. Diversity means, If I look at a movie screen, I am going to see all shapes and sizes, all ethnicities, different genders. To make it a 'black or white' conversation diminishes all of the other categories."

"Diversity means, If I look at a movie screen, I am going to see all shapes and sizes, all ethnicities, different genders. To make it a 'black or white' conversation diminishes all of the other categories." —Octavia Spencer

"I don't like to answer the diversity question," she continues. "Because I know that people aren't asking me about diversity; they are asking me as a black woman. I can't speak for all black women. I can only speak for myself. I am happy for the opportunity, and I think we need more opportunity for all people."

It's a good thing then that there's so much more to talk about, so much more to applaud. "I would love for this to be a celebration, like Apollo 13," Spencer says. "The fact that we have to say that this was never talked about is sad. But we're talking about it! And we won't allow anyone else to be omitted from the annals of history."

Jen Ortiz Deputy Editor, Cosmopolitan As deputy editor, Jen oversees Cosmopolitan's daily digital editorial operations, editing and writing features, essays, news, and other content, in addition to editing the magazine's cover stories, astrology pages, and more.
This content is created and maintained by a third party, and imported onto this page to help users provide their email addresses. You may be able to find more information about this and similar content at piano.io
Advertisement - Continue Reading Below
More From Celebrity
See the Royals Socialize at a 1991 Cocktail Party
Eugenie's Pics from Inside Harry and Meghan's Home
Advertisement - Continue Reading Below
Queen Trolled Tourists Who Didn't Recognize Her
Blake and Ryan Recreated Their First Date on IG
Charles Expertly Ignored Boris Johnson's Snafu
How Kitty Spencer's Wedding Dress Honored Diana
Dolly Parton On the #FreeBritney Movement
Will & Kate Are Nervous About George's Future
George Won't Be Forced to Go to Boarding School
Diana Would Have Written a Memoir Too, Friend Says