In the happiest news I've received in a while, Jennifer Garner has a BOYFRIEND. I know, I was thrilled when I found out too. The recently-divorced actress has been dating businessman John Miller, 40, for about six months, sources tell Us Weekly. A source said “Jen brings out the best in John, and he is the happiest he has probably ever been. It’s a loving, healthy relationship.” They've succeeded on keeping this all on the DL, but not anymore! Here's everything we know about Miller, just in case you were curious.

Miller is CEO and chairman of Cali Group, a tech company that owns Miso Robotics as well as a chain of 50 CaliBurger restaurants, most known for using the “Flippy” tool, which takes cooking tasks that are usually manual labor and automates them. You can even order a burger with your face at Caliburger. He's got a very strong idea of what he imagines the future of restaurants to be, too.

The Stanford grad is the co-author of The Handbook of Nanotechnology: Business, Policy, and Intellectual Property Law. Considering I don’t even know what nanotechnology is, it’s a pretty safe bet that this guy is one smart cookie. Here he is in action:

Us Weekly reports that yes, Miller has met Garner’s children, daughters Violet, 12, and Seraphina, 9, and son, Samuel, 6 from her marriage to Ben Affleck, from whom she separated from in 2015, and their divorce recently finalized. Miller himself has two children— a 12-year-old son and a 10-year-old daughter from a previous relationship.

4. It's getting pretty serious between him and Jen, despite one little thing.

He's still legally married. Miller and concert violinist Caroline Campbell separated in 2014 after nine years of marriage, and have yet to sign the divorce papers. A source told Us Weekly that the couple are waiting for a judge to sign off on the paperwork. But still, that hasn't stopped the love from blooming: “[Miller and Garner] been together for six months,” a source tells Us. “It’s getting serious.” 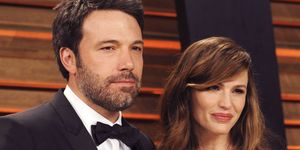 Ben Affleck Thanks Jen for Support During Rehab
Jennifer Garner Eats Baby Food with Champagne
Amanda Mitchell Amanda Mitchell is a writer and podcaster with bylines at Marie Claire, OprahMag, Allure, Byrdie, Stylecaster, Bon Appetit, and more.
This content is created and maintained by a third party, and imported onto this page to help users provide their email addresses. You may be able to find more information about this and similar content at piano.io
Advertisement - Continue Reading Below
More From Celebrity
Meghan Markle Expresses Sympathies to the Queen
Prince Harry Remembers Prince Philip
Advertisement - Continue Reading Below
Prince William Statement on Prince Philip's Death
Meghan and Harry Are Facing Security Threats
Selena Gomez Is Drenched in Fake Blood on Set
Amanda Seyfried Talked About Having Panic Attacks
Harry Arrives in the U.K. For Philip's Funeral
Matthew Perry Deletes 'Friends' Reunion Instagram
The Queen's Corgis Are Helping Her With Her Grief
Charles is Looking Forward to Seeing Harry Again