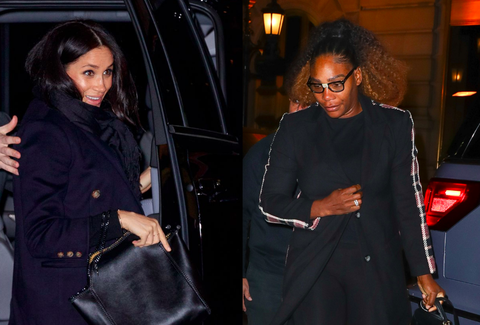 After a day celebrating the newest royal-baby-to-be, the Duchess of Sussex was spotted getting dinner this evening with a few of her closest friends, including tennis star, new mom, and general GOAT Serena Williams. Williams, along with stylist Jessica Mulroney and Markus Anderson, were photographed on their way into Polo Bar, Ralph Lauren's Manhattan restaurant. Markle, who's been in town since Friday and was photographed earlier today leaving The Mark, where she reportedly hosted her New York baby shower, was snapped again this evening on her way into Polo Bar, in a second fab, lowkey outfit.

Like her outfit for the day's activities (a navy William Vintage Courrèges Haute Couture coat, a pair of black slim cut jeans, gray Carolina Herrera tote, and $70 Le Specs sunglasses), for the chic nighttime outing, the Duchess chose a similar dark color scheme, going with a navy Victoria Beckham coat, Tamara Mellon calf hair boots, Stella McCartney bag, black scarf, and dark jeans. She was all smiles as she was photographed making her way to the restaurant from the car, obviously very happy to be joined by her friends for the evening before she heads back to London (reportedly tomorrow morning!).

Williams and Markle have been friends for several years, but in an interview in September, the tennis star revealed that she and the Duchess of Sussex have been leaning on each other for support even more these days "We were actually just texting each other this morning. We have known each other for a long time, but we really kind of are relying on each other quite a lot recently,” she said.

Williams, who has a one-year-old daughter with husband Alexis Ohanian, told People in December that pregnancy hasn't changed her friend one bit. “I’m like, ‘How are you?’ and she’s like, ‘No, how are you?’ and I’m like, ‘You’re so sweet, but I’m really asking – how are YOU?’ ” said Serena. “I’m like, ‘Meghan, stop being so nice…you’re the pregnant one, aren’t you supposed to have hormones, why are you so sweet?’ But that’s always been her.”

This content is created and maintained by a third party, and imported onto this page to help users provide their email addresses. You may be able to find more information about this and similar content at piano.io
Advertisement - Continue Reading Below
More From Celebrity
Gwen Stefani Is Unrecognizable In New Insta Post
Lady Gaga Wore Serious Platform Heels in Rome
Advertisement - Continue Reading Below
North West's Pet Lizard Has Its Own SKIMS
Is Harry & Meghan's Archewell Update a Royal Diss?
Why Is the Royal Family Called "The Firm?"
Meghan Says Palace Is “Perpetuating Falsehoods"
Twitter Blasts Media's Targeting of Duchess Meghan
Palace Is Looking Into Meghan Bullying Allegations
Meghan & Eugenie Are Still Close After Royal Exit
Harry's Oprah Interview Suit Is a Nod to Archie