It's almost here! HBO's Game of Thrones TV show is about to kick off its final season—but at the same time, George R. R. Martin is hard at work writing the sixth of his seven-book Game of Thrones series, this one called The Winds of Winter. Book seven, A Dream of Spring, hasn't even been written yet. So, uh, how does that work?

Short answer: At this point, the show is far ahead of the books, and HBO has had to make some big narrative leaps and changes to get to where they are today. But that still begs the question—provided Martin finishes the series, how is he going to reconcile the changes in the books?

"[The TV series has] been an incredible ride," Martin said to Entertainment Weekly. "And almost all of it has been great. Obviously, I wished I finished these books sooner so the show hadn’t gotten ahead of me. I never anticipated that."

And the two are on different tracks.

Showrunner David Benioff explained to EW: “Now that the show is ahead of the books, it seems the show could ruin the books for people. So one thing we’ve talked to George about is that we’re not going to tell people what the differences are, so when those books come out people can experience them fresh.”

And Martin may not even know the full book details yet.

“[The show is] the end for a lot of people,” Martin said. “It’s not the end for me. I’m still deeply in it. I better live a long time because I have a lot of work left to do.”

But, we still have a few hints thus far for what might be in store.

Sansa's storyline will not be as important.

Per this Bustle article, Sansa was barely even part of Martin's original outline for the book series. In the novels, Sansa is apparently still in the Vale of Arryn with Littlefinger, who's still alive in the book (full disclosure: I haven't read the latest book, so I'm going based off of reports from people who have). So, given how important Sansa has become to the series, that'll be a huge difference.

The show is missing a lot of characters.

Part of the reason why Martin's books take so long to write is for the in-depth world building and large numbers of characters. For the sake of streamlining the narrative, the show had to abandon several plotlines or just straight-up kill them.

There's Lady Stoneheart (the reanimated Catelyn Stark), who never appeared. Same with Dany's nephew, Aegon Targaryen. Stannis Baratheon, Myrcella and Tommen Lannister, Mance Rayder, and the Boltons are all dead in the TV series, just to name a few. It's been a bloodbath—and I haven't even listed nearly all of the characters gone or missing.

And allegiances are very different.

The dynamic between Cersei, Jaime, and Tyrion Lannister is very different in the books. The Sand Snakes and Martells are still in play in the novels. The Greyjoys are still prisoners of Stannis in the books.

Lots of the shifting alliances have moved in totally different directions in the series, and Martin may have different thoughts about who should match up with whom.

So, there you have it. Good news: The books will still be a revelation for fans who enjoy Martin's extensive scope and meticulous writing. 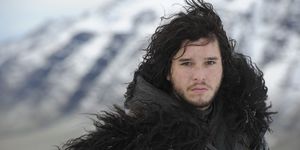 The 'GoT' Series Is Officially Going Off-Book
Next 'Game of Thrones' Book Gets Release Date
Katherine J Igoe Katherine’s a Boston-based contributing editor at Marie Claire online who covers celebrity, fashion, entertainment, and lifestyle—from “The Bachelor” to Everlane to Meghan Markle.
This content is created and maintained by a third party, and imported onto this page to help users provide their email addresses. You may be able to find more information about this and similar content at piano.io
Advertisement - Continue Reading Below
More From Celebrity
The Palace Just Shared Prince Louis Birthday Pic
Meghan and Harry Talked Every Day During UK Trip
Advertisement - Continue Reading Below
J.Lo Wishes A-Rod's Daughter a Happy Birthday
Irina Shayk Shared a Rare Photo of Her Daughter
John Travolta Talked Dancing With Princess Diana
Meghan Markle and Archie Speak to the Queen
Who Is Alexandria Ocasio-Cortez's Partner?
Did Charles, Harry, and William Mend Relationship?
The Kardashians' Most Body-Confident Nude Shoots
Chrissy Teigen + Meghan Markle Spoke About Loss