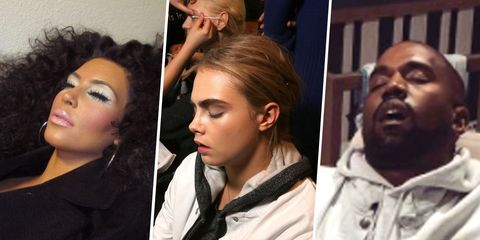 Hush, little famous person, don't say a word—you can't anyway, because you've somehow fallen asleep in a very public place, such as an awards show or in the front seat of a vehicle millimeters away from plowing through a hedge of paparazzi. Did you take an Ambien? Are you okay? "Undetermined" may be the answer to all of the above, but here, all the photographic evidence speaks for itself.

So today we went baby shopping with @johnlegend & @chrissyteigen Kanye & North were a little too quiet. We found them passed out in the middle of the store 😂👼🏽 #TheRealLifeOfPablo

Random sleep foundation, if you're reading this, why haven't you asked Kanye to be a spokesperson yet? (I realize the monetary compensation would have to be hefty.) But with his anytime, anywhere philosophy, it would seem that he's already promoting getting your nightly eight hours—or just passing out whenever there's a free moment. Which seems like an awful lot of the time, if you look at the pics.

In a chair! On a plane! In bed next to Kim Kardashian!

On a couch, next to his MIL!

I think my favorite part of the Oscars so far has been Chrissy Teigen sleeping on John. She is my spirit animal. pic.twitter.com/bgabC5fmqM

Kind of awkward for the people who were there to collect awards at the 2017 Oscars. But not for us!

When you wanna pee at the house party pic.twitter.com/YoAhCDJ35U

Take the age-old question "How much fun can you really be having at a party if you're posting about it on social media?" and multiply it by "sneaking off to have a nap during it."

None of us knows how it feels to be Beyoncé, but we might deduce that it requires a lot of energy, some of which must be recovered while snoozing. (Does she do the Uberman sleep schedule thing, though? Someone find out and report back.)

Ah, to be young and able to get your H&M done ("hair and makeup," in Kardashian speak) while supine.

Heavy is the head that is next in line to wear the crown. (Though I feel like Queen Elizabeth swatted at him with a program or spare Corgi soon after this was taken.)

The provided caption reads "Tyga falls asleep after hanging out with Chris Brown at 1OAK," which is...loaded, to say the least.

Meanwhile, this caption says he was caught resting up after "a late night of partying." Seems sensible.

Reports say Mars "rested his eyes" during A$AP Rocky and Mary J. Blige's BET Awards performance, which some took to be shade, while others took it to mean he was tired.

You know what? You deserve it, Morgan Freeman.