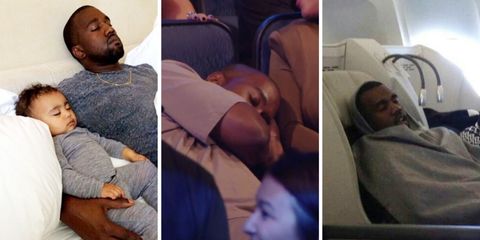 Poor Yeezy, he just can't seem to catch any Zs.

Despite being uncharacteristically smiley at the VMAs, Kanye West—nay Kanye Rest—still had to take an obligatory public nap.

While Taylor Swift's accepted her award for "Best Pop Video," West opted out of the awkwardness of the situation (remember when her crashed her 2009 speech?) and instead ensured that his REM cycle was on point.

He might have been faking it, but because West just always seems to be hitting the sack, we're looking back at each time he was caught mid-snooze. Wake up, Mr. West!

While shopping with Chrissy Teigen and John Legend (what a dad)

So today we went baby shopping with @johnlegend & @chrissyteigen Kanye & North were a little too quiet. We found them passed out in the middle of the store 😂👼🏽 #TheRealLifeOfPablo

With Lil Nori in His Arms

At a white-themed party with Kris Jenner and James Harden

In a selfie with Kim