Today's Top Stories
1
Kate and Will Are Symbolically Leading Monarchy
2
How Planned Parenthood Is Responding to COVID-19
3
How to Build a Mini Gym at Home
4
Julia Louis-Dreyfus Has All the, Uh, Right Answers
5
Actress Katherine McNamara's Fave Face Mask Is $5
Getty Images

In a stroke of pure casting genius, actress Mischa Barton will be a main character on The Hills: New Beginnings when the classic MTV series is rebooted on June 24. It’s been nine years since the final episode of the original series—the one that brilliantly maybe-sort-of revealed how scripted the show actually was—and it’ll be Barton’s first time on the show. You’ll no doubt remember her from her starring role as Marissa Cooper on the iconic early-aughts primetime soap The O.C. on Fox, from which the MTV reality show Laguna Beach and its offshoot The Hills were spawned.

But though she hasn't had a role quite as memorable as Marissa, that doesn't mean Barton has stayed out of the limelight.

So where has she been? And how did she end up on The Hills: New Beginnings? Here are some of the highlights of the past 11 years of her career, leading up to her new MTV gig.

(Warning: Spoilers for The O.C. below, though to be fair, the statute of limitations is probably up on that.)

Barton left the show that launched her into stardom after her character Marissa was killed off in a pretty tragic—albeit sort of anticlimactic—car accident. But exactly why this happened is kind of disputed.

In an interview with HuffPost, O.C. creator Josh Schwartz explained the decision to kill off Marissa thusly:

“It was a hundred percent a creative decision for the show and it was born out of both feeling creatively like it was the direction the show needed to head and also, quite frankly, a function of needing to do something big to shake up the show at the end of that third season to both get the show to come back for a fourth season and, I think, to give the show a real creative jolt in Season 4 and move the show in its own surprising, unexpected direction.”

So it was a creative decision, not a personal one (or even one Barton necessarily made) to hear the showrunner tell it. But Barton has maintained, as recently as May 2019, that the decision to leave was hers. “I just had a lot in my career that I wanted to do and accomplish....I felt like things were really heavily reliant upon me, and I was getting no time to do any of the other offers that were out there,” she told the New York Times.

But during The O.C.’s run, Barton was a big-time Hollywood actress, gracing magazine covers and even presenting at the 2005 Emmy Awards.

Barton presenting at the Emmys with Adrian Grenier.
Getty Images

After her character was killed off, Barton moved back to England (where she was born before moving to the States as a kid) for “a year of real self-exploration,” she said.

Like any gorgeous young starlet in the 2000s, Barton made a lot of headlines—and not all of them were positive. While anything that appeared in the pages of a tabloid should be taken with a grain of salt, Barton nevertheless started to gain the reputation for being a party girl, which may have hurt her career.

In 2008, she was arrested and eventually charged with misdemeanors after police found she possessed a small amount of marijuana and a higher-than-legal blood alcohol level after a routine traffic stop in West Hollywood. She later told Ryan Seacrest, “I’m really disappointed in myself.”

There were also unflattering photos sold of her, and a lot of paparazzi attention. It clearly got to her, as one E! Story from the time suggests she was visibly upset after arriving to a club to find a bunch of photographers waiting.

At this time, she also embraced her sexiness, according to E!, appearing in Maxim and FHM.

March 2009: She joins the cast of The Beautiful Life.

The short-lived, Ashton Kutcher-produced drama series about models, The Beautiful Life, featured Barton in a primo role, as supermodel Sonja Stone. But the show was cancelled after two episodes due to poor ratings. (TBH, we think they should reboot it—would totally watch now.)

Also this year, Barton was hospitalized in New York for a “nonemergency” “medical issue,” according to her publicist at the time—an event that was also covered with much curiosity by the tabloids. In an interview with The View, Barton suggested that her stay had to do with painkillers that she initially started taking for her wisdom teeth, though didn’t go into very much detail.

2012: She launches a fashion line and appears in a music video.

In 2012, Barton launched a now-defunct fashion website called Mischa’s Place, and then opened some retail stores in Dubai, according to Racked.

Also that year, she appeared in leopard print underwear in the music video for a song from Noel Gallagher’s High Flying Birds (the band formed by the former Oasis member), called “Everybody’s On the Run.” It’s kind of a weird video:

From 2012 to 2016, she starred in a slew of small roles in mostly independent movies, according to her IMDB page. She also had a fair share of high-profile drama, including some tabloid-y breakups and a very public legal fight with her mother in 2015. Still, these years found Barton lying pretty low.

2016: Barton is a contestant on Dancing With The Stars

In 2016, she made the beginnings of a comeback to stardom with a contestant role on Dancing With The Stars.

But unfortunately, she was eliminated second. In December of 2016, she spoke negatively about the experience to The Ringer, in an interview that framed her as a teen star approaching her 30th birthday:

"I got told off by my dancer. I was supposed to control the costumes, I was told that I could do the design aspect of it, that’s kind of the reason why I agreed to do it," Barton says. The DWTS team had been making her an offer for years, Barton says, but she held out until she could have more creative control. "That didn’t happen. It wasn’t collaborative like a choreographer on a film set. …I was so confused by it. It was like The Hunger Games. It was all a popularity contest. It was awful. I was so glad to get kicked off." (ABC did not respond to a request for comment.)

Yikes. Sounds like she did not have a good time.

In an interview with Amanda Knox, Barton revealed that she found out an ex of hers was allegedly trying to shop around a sex tape for half a million dollars. Even worse? She read it in the tabloids. Instead of cowering, she made the decision to go public with the story and filed restraining orders against that ex as well as his friend, another former partner who she alleged knew about the images as well. Ultimately, the two men agreed not to release or distribute the material, but Barton told the New York Times that the case dominated her life.

She told Knox, “It’s a wonderful feeling to know you’ve done the right thing, even if you had to fight for it.”

Now: Barton will be a cast member on The Hills: New Beginnings

According to the New York Times, Barton had been living quietly in the Hudson Valley in New York, keeping out of the spotlight, when The Hills came knocking:

The producers of the show, which premieres on June 24, pursued Ms. Barton for three months last summer. “Obviously, I’m a working actor, so I do take jobs in general,” she said, “but when it comes to things I know are going to be big endeavors, it’s always kind of a process with me.” Reality would be a whole new genre for her. Plus, she initially thought the idea of her being scouted for the show was a joke.

Eventually, according to the same article, Barton agreed to take on her first-ever reality show assignment (Dancing With the Stars being more of a competition show).

She also, naturally, appeared in the show’s teaser trailer in April:

We can’t wait to see what happens and whether she gets the new beginning the show promises.

The Hills: New Beginnings premieres on MTV on Monday, June 24.

Related Stories
50 Facts You Never Knew About 'The O.C.' 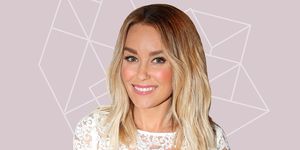 10 of Lauren Conrad's Beauty Secrets
Will Kristin Cavallari Ever Return to 'The Hills?'
Advertisement - Continue Reading Below
More From Celebrity
A Full Timeline of Tyler C. & Hannah B.
Blake and Ryan Donate $400K to NY Hospitals
Advertisement - Continue Reading Below
Prince William May Work as an Air Ambulance Pilot
Harry Is Likely to Get U.S. Diplomatic Status
Harry Was Forced to Give Up His Military Titles
Ariana Grande Revealed Her Natural Curls
Fans Love This Accident Meme of Queen Elizabeth
Kate and Will Are Symbolically Leading Monarchy
Meghan & Harry Posted Their Last Sussex Instagram
Kate Middleton Takes Off Her Engagement Ring