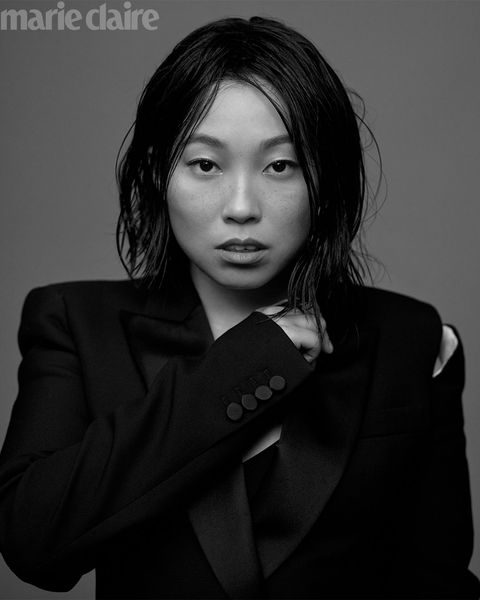 For the October 2019 issue of Marie Claire—which happens to be our 25th anniversary issue, a milestone we're celebrating by honoring 25 women who are changing the future—Allison Glock interviewed Awkwafina. The icon, who most recently starred in the critically acclaimed The Farewell, has several projects on the horizon, including the forthcoming live action The Little Mermaid. The comedian is set to play Scuttle the seagull. Ariel will be played by Halle Bailey, and it's rumored that Jacob Tremblay will play Ariel's sidekick, Flounder.

In her piece, which you can read here, Glock outlined what Awkwafina had in store for us. November 1, you can expect the fantasy drama Paradise Hills, and December 20 will bring us Jumanji: The Next Level. But that's not all!

Now, Awkwafina’s options appear limitless. She’s already seduced critics as the emotionally riven lead in The Farewell, a profound family drama about grief, connection, and the burdens we carry. She stars in November’s thriller Paradise Hills and December’s Jumanji: The Next Level opposite Dwayne Johnson, and she’s set for roles in the screen version of Broadway’s The Prom, with Meryl Streep, and the live-action Little Mermaid. Also on Awkwafina’s overflowing plate is her as-yet-untitled Comedy Central series loosely based on her upbringing in Queens.

Awkwafina had previously been cagey about her much-rumored role in The Little Mermaid reboot. In late August, she told ET: "Aww man, that all isn't confirmed yet, but obviously if it happens, I would be more than honored...It's a classic, yeah. I'm very, very happy. That's my princess right there, so I'm very happy with what they have [announced] so far."

In a Givenchy jacket.
Thomas Whiteside

Rumored to be joining Awkwafina and Bailey, along with Tremblay, is Melissa McCarthy, who is reportedly playing Ursula. Lin-Manuel Miranda is also lending a hand to the soundtrack, which will feature both old and new songs from the movie's original composer Alan Menken, and Javier Bardem may be in as King Triton. No word yet on who will play Prince Eric, although Harry Styles confirmed that, sadly, it would not be him.

Anyone else counting down the days 'til this movie premiers?

Related Stories
Awkwafina Never Thought She'd End Up Here
25 Women Changing the Future
Jenny Hollander Director of Content Strategy Jenny is Marie Claire’s Director of Content Strategy, editing and writing about everything from politics to reality television to accessories and celebrity news.
This content is created and maintained by a third party, and imported onto this page to help users provide their email addresses. You may be able to find more information about this and similar content at piano.io
Advertisement - Continue Reading Below
More From Celebrity
Beyoncé Celebrates Twins Rumi and Sir Turning 4
Katie Nails Casual Cool in Jeans, Tee, and Loafers
Advertisement - Continue Reading Below
Gigi Hadid Wore the Coolest Bright Orange Eye Look
Courteney Cox's Daughter Coco Is Her Double
Sophie Shared a Stealth Selfie on Instagram Story
Meghan and Diana Had Similar Issues with the Queen
The Queen Insisted on Cutting a Cake with a Sword
Harry Texted Kate, Not Will, When Lili Was Born
Kate's Kids Want Her to Stop Taking Their Pictures
SJP Posted Pics from the 'SATC' Revival Table Read