Be honest with me, friends: Just how many times in the average week do you play "Emotion" by Destiny's Child, suppress an ugly cry in the bathroom at work, then make an urgent plea to the universe for a DC3 reunion? Well, there's hope for you yet: Kelly Rowland spoke about whether Destiny's Child would record new music in the future, and she didn't rule anything out.

Asked about a potential reunion during an interview with Entertainment Tonight, Rowland responded, "I will say, we have made incredible music in the past," adding, "Can we, like, have surprises in this day and age?" She continued, "I just find it so interesting, everybody wants to know in advance." Forgive me, Kelly! I need sustenance!

"I know every time there is a decision to be made for myself and the ladies to do something, it's usually a surprise. And our fans have always been so supportive and so awesome, like, I like to give them surprises," Rowland said. "I've got nothing up my sleeve, I promise you, nothing up my sleeve, but yeah, I wouldn't say anything." Kelly, if it's all right with you, I'm just going to ignore that "nothing up my sleeve" part.

This time last week I was with my girls.. ☺️have a great show tonight B!

Even if there's no new Destiny's Child music on the way, there may well be some old stuff coming. Last week, the band's former manager Mathew Knowles (also known as the father of Beyoncé and Solange) posted a clip on Instagram, announcing that an unreleased Girl's Tyme album, as the band was originally known, would be dropping soon "on all streaming platforms." Consider me very much intrigued! 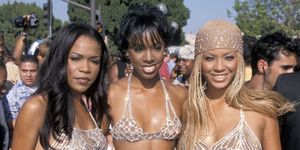