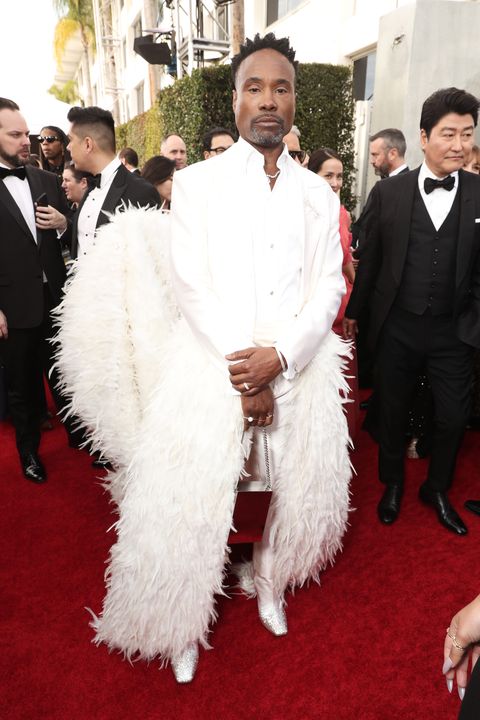 Billy Porter just appeared on the Golden Globes red carpet and—surprise!—he's in an iconic look. The Pose star (and nominee tonight) never disappoints when it comes to awards show dressing (remember the incredible tuxedo dress he wore to the Academy Awards last year? How about the pink and red tulle number he sported for the Tonys?), but tonight's outfit surpasses all expectations: It's not just regal, it's bridal. And it's making me question everything.

For starters, thanks to the incredible feathered train, Porter's look requires a helper, and I am really here for any outfit that requires at least one assistant. The custom Alex Vinash all white tuxedo, which, Porter shared, took three months to create (and was done in the "hopes" that he would be nominated and could wear it tonight since the Globes noms hadn't been announced at the time), has one very practical, genius feature: The train is removable. Those feathers are zip-on, zip-off. GENIUS. "This is not a sitting outfit, this is a standing outfit," Porter told Ryan Seacrest during his E! interview. He finished the look with bedazzled Jimmy Choo shoes and Tiffany jewels. Perfection.

This look makes me livid: It's so good! I got married this summer and WHY DIDN'T I WEAR A WHITE TUXEDO WITH A REMOVABLE FEATHERED TRAIN?!?! I've made so many mistakes! It's zip-on, zip-off! I am devastated! I don't know if I could have pulled it off with the same pizazz as Porter, but I would have loved to have tried! I may need to call a do-over. And if I'm going to borrow Billy's jacket, I might as well ask if I can steal the velvet litter and cast of dudes he used for his 2019 Met Gala entrance because subtly is overrated!

Related Story
The Best Looks from the 2020 Golden Globes
Sally Holmes Editor in Chief Sally is the Editor in Chief of Marie Claire where she oversees coverage of all the things the Marie Claire reader wants to know about, including politics, beauty, fashion, and celebs.
This content is created and maintained by a third party, and imported onto this page to help users provide their email addresses. You may be able to find more information about this and similar content at piano.io
Advertisement - Continue Reading Below
More From Golden Globes 2021
Anya Taylor-Joy Stuns at the Golden Globes
The Most Awkward Moments of the Globes
Advertisement - Continue Reading Below
Chadwick's Wife Accepts His Golden Globe
The Prettiest Beauty Looks at the Golden Globes
Laverne Cox's Bridgerton–Inspired Updo Is Spot-On
Best Celebrity Instas from the 2021 Golden Globes
'Bridgerton' Was Snubbed at Golden Globe Noms
The Chicest Golden Globes Looks From IRL and Home
Taylor Swift Seems to Have Forgiven Amy Poehler
Joey King Got Hit in the Head with a Golden Globe