Ah, to spend months poring over baby books and testing out name combinations, only to finally settle on the perfect baby name—and realize, almost a year later, that you've called your son "genital." That, hilariously, is exactly what happened to Amy Schumer and husband Chris Fischer, who originally named their son Gene Attell Fischer—his middle name a tribute to their friend, comedian Dave Attell. Which, while a lovely name, could be easily twisted by future schoolyard bullies into "genital fisher," Schumer said in the latest episode of her podcast, Amy Schumer Presents: 3 Girls, 1 Keith.

"So do you guys know that Gene, our baby’s name is officially changed? It’s now Gene David Fischer," Schumer said, as People reports. "It was Gene Attell Fischer, but we realized that we by accident named our son 'genital.'"

Podcast guest and Schumer's friend Claudia O’Doherty admitted that her mom had first recognized the issue. "My mom was like, 'Amy’s called her son 'genital.' And I was like, 'What are you talking about?' And then, she was right."

Fortunately, Gene's new middle name still pays tribute to Dave Attell, with an added nod to Schumer's dad, Gordon David Schumer. And speaking of Gordon: Amy and Gene made a very sweet visit to his home last month, holding up a sign outside his window reading, "Hi Grandpa! We love you!" to abide by social distancing rules. Cute! 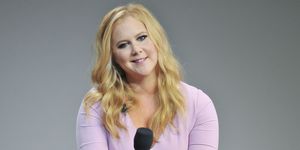 Only Amy Schumer Can Make Food Poisoning Funny
Emily Dixon Emily Dixon is a British journalist who’s contributed to CNN, Teen Vogue, Time, Glamour, The Guardian, Wonderland, The Big Roundtable, Bust, and more, on everything from mental health to fashion to political activism to feminist zine collectives.
This content is created and maintained by a third party, and imported onto this page to help users provide their email addresses. You may be able to find more information about this and similar content at piano.io
Advertisement - Continue Reading Below
More From Celebrity
Lady Gaga Wore Serious Platform Heels in Rome
North West's Pet Lizard Has Its Own SKIMS
Advertisement - Continue Reading Below
Is Harry & Meghan's Archewell Update a Royal Diss?
Why Is the Royal Family Called "The Firm?"
Meghan Says Palace Is “Perpetuating Falsehoods"
Twitter Blasts Media's Targeting of Duchess Meghan
Palace Is Looking Into Meghan Bullying Allegations
Meghan & Eugenie Are Still Close After Royal Exit
Harry's Oprah Interview Suit Is a Nod to Archie
Ryan Seacrest's Relationship History, Explained