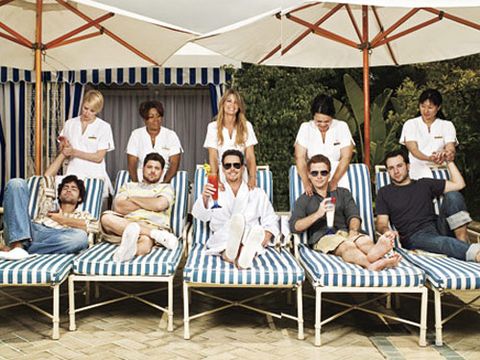 It was an enviable assignment: Be an Entourage guy for a day. Breakfast and pedicures with the boys, just bantering the way they do on their excellent HBO show every Sunday night. How hard could it be? For me - not exactly a Hummer-driving ass magnet - very.

Jerry Ferrara, who plays the group's potbellied, pot-smoking mascot Turtle, arrives first with Kevin Connolly, who plays E, the tightly wound manager. Kevin Dillon, the thespian wing nut Johnny Drama, saunters in next. They talk about a fight tomorrow in Vegas and who's going with whom. It's like listening to high schoolers - albeit high schoolers with ringside seats and access to private jets.

"Who's Dillon going with?" asks Connolly, lighting up a cigarette.

"One of the Billys," says Jerry. "I think it's Sensitive Billy."

Adrian Grenier, who plays Hollywood It boy Vincent Chase, struts straight from his chauffeured Prius up to the table and says, "What is going on here?"

He's pointing at my Bloody Mary (when in Rome, was my thinking). "Am I allowed to have one?"

We all order scrambled eggs or omelets except for Drama - I mean, Dillon - who goes for Lobster Eggs Benedict.

I ask Adrian what he did last night. The rest of the guys did nothing special - watched the Warriors "destroy the Mavs"; beers with one of the Billys. Adrian, however, went to a party. "Scary," he says. "Lots of people. I ended up getting stuck in a corner."

I feel for him. I, too, often wind up in a corner at parties. It's heartening to know we have so much in common. "I get accosted," he says, and I nod.

"I heard you had an after-party the other night," says Connolly to Adrian. He almost seems pissed he wasn't invited.

"There's no better way to kill an after-party and get girls to leave than to start jamming," says Adrian, who drums in a "country/glam-rock/ukulele band" called The Honey Brothers. "It's a good way to weed the bad ones out. But the good girls, they love it."

I play some guitar myself, and I'm thinking I should invite Adrian over to soft-rock out next time he's in New York, but before I can, Jerry interjects: "I'll be damned if I'm gonna drive to Silver Lake and watch Adrian play the drums at 2 in the morning."

Dillon looks up from his lobster chunks: "Adrian, mouse in the bricks."

Who in the what?

"It's code," says Dillon. "It means he's got something stuck in his teeth." Adrian picks out a speck of toast.

I ask Connolly what it's like to work with so many fine women. "There's a lot of on-set crushes," he says. "We call them Set Feelings."

Dillon offers, "I'm a married man. I don't get those."

"Adrian's been known to get them, too."

Adrian asks to trade a piece of his turkey bacon for my bacon bacon. We swap.

"I had Club Feelings the other night," Connolly continues. Everyone at the table agrees, Club Feelings are the toughest kind of Feelings. "She was hot, and I choked. What else is new?"

"Back when I was a predator, I normally chickened out," says Jerry, who lives with his girlfriend now. "I hung up my claws."

Dillon offers me a bite of lobster. "I see you've been eyeing that!"

We hit the spa. "I'm getting my nails done," says Dillon. "Manis and pedis."

"I'm getting a pedi," says Connolly. "All my tension goes to my feet."

"I do not," says Connolly. "They hurt because I'm athletic."

"Whatever," says Dillon. Then, to one of our female attendants, "If you've got a razor, maybe you can shave his toes."

Me too! Maybe they should write me into the script.

This content is created and maintained by a third party, and imported onto this page to help users provide their email addresses. You may be able to find more information about this and similar content at piano.io
Advertisement - Continue Reading Below
More From Celebrity
Jennifer Lawrence Said She Used to Be Republican
See Hailey Bieber's New Justin Tattoo
Advertisement - Continue Reading Below
Meghan and Harry Have Launched Their Website
Meghan and Harry Opened Up About Online Hate
Miley Cyrus Said She Was Chased by a UFO
Why Prince William Was Jealous of Prince Harry
Kate Wore a Stunning Fall Red Coat for Visit
Gigi and Zayn's Body Language, Decoded By A Pro
Billie Eilish Posts Nikes Version of 'The Dress'
Ashley Graham Celebrates Body With Nude Photo