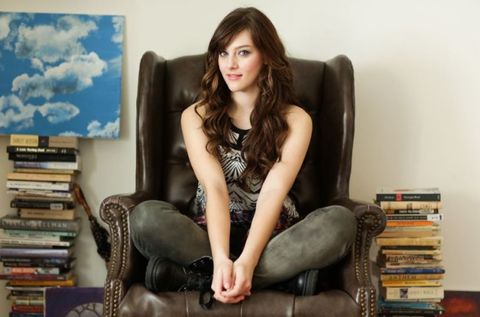 Actress, singer, songwriter, and soon-to-be producer Aubrey Peeples dropped by Marie Claire looking more like a cool, young Janice Joplin than her Nashville character's girly, attention-driven and dolled-up instigator. Starring in one of TV's hottest dramas is only one of the many impressive feats for Peeples. This year she stars in a film opposite Nicholas Cage, assumed the role of Anne Frank for a short film on the Holocaust diarist, and is even talking about an album of her own.

MC: So tell me about meeting Nicholas Cage, you were dead?

AP: It's kind of embarrassing on my part. So I die in the film Tokarev—and I'm not giving too much away because that's in the trailer—so the first scene that I shot with him, I was playing my corpse-self on the morgue table. I had the worst makeup on to look dead and I was just naked on this table under a sheet. And Nicholas Cage walks in and said, [in a remarkably good Nicholas Cage impersonation], "Hi, this is the oddest way I've ever met a colleague."

MC: Well memorable for sure! And you shot that in the South too in Mobile, Alabama Nashville shoots in Nashville). How is it down there?

AP: I have never spent so much money on bowling in my entire life! And laser tag. Bowling and laser tag. It was hilarious.

MC: I'll bet! A little different than Nashville's scene, which is so cool. But I do have a very serious question about Nashville…does Layla finally find out Will's gay?

MC: Well at first we wanted her to find out, so she could stop being such a brat about everything and also youknow we feel for Will's character, but lately we've been feeling a little sorry for Layla too.

AP: I think you're going to feel really bad for her coming up. I think the audience is going to be able to empathize more with Layla, which is good. I mean every vixen has her motives.

MC: Very true and intriguing. Speaking of vixens, what's it like going at it with Hayden Panettiere all the time?

AP: Our scenes are so much fun because we're always fighting with each other and I love being able to be aggressive and get some aggression out in a harmless way.

MC: And what about your character's look, all cutesy-cowgirl, is that close to your own style?

AP: Oh no. No, no, no, no, no I don't dress anything like Layla. She dresses to the nines: Valentino, Alice + Olivia. I'm scared to be in [those clothes], I'm afraid I'm going to destroy them. But no, I tell people I normally dress like a homeless grandfather from the '90s.

MC: Haha that's awesome—and I know the look. Actually that's pretty in line with music artists, which you are too. Your guitar is gorgeous. Did you get it in Nashville?

MC: That's so cool. Would you play something for us?

MC: I love that song. It reminds me of that Banksy painting, you know the one with the red balloon?

AP: I actually have a funny Banksy story.

AP: So I was watching Exit Through The Gift Shop for the first time and they did a fast pan through his workshop. And I noticed on the wall is tacked this little piece of paper. And I paused it and I was like, 'Oh my gosh, I own that. I didn't know it was Banksy.'

And so I tried to remember the situation that I got it in. And I got it at a flea market from this guy. His name is like Neil or something normal. And I remember asking him, "Are these your original images." And he said yes. I'm assuming what actually happened is that he ripped him off and I own a re-production.

MC: No way. You met Banksy. And we finally know his name. His friends call him Neil. And so now, we will too.

Tune in tonight at 10PM ET for a new episode of Nashville on ABC.