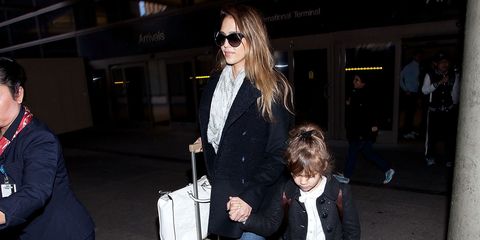 Just imagine if, on your next flight, a famous person tripped down the aisle, held up the line shoving his carry-on into the overhead bin (c'mon, man), then plopped down...right next to you. With the following 10 celebrities, it really could happen, so maybe wear your dressy sweats, and definitely be cool.

Technically, it was the only seat left, but that Danes still deigned to take it—after the 2011 SAG Awards, no less—says a lot about her. "I know, I know—I feel like I'm bragging now at this point," she said. "I have to go back to work tomorrow morning. I get to shower in the hotel and then I go to set—and act some more. We'll see how tomorrow's scene will be."

Seems like a chill dude, is actually enough of a chill dude to mingle with the populace on what seems like a regular basis. There have been multiple sightings of the presidential candidate suffering and sleeping open-mouthed among us common folk, and even more selfies, as evidence.

Amazing his fellow passengers going from Memphis to Dallas, the future monarch took a window seat not at the front of the aircraft. Was it so he could lean his head (heavy, the one that will wear the crown) on the plastic siding? Or maybe he has incredible bladder control? We might never know.

Anything for the children. Traveling from L.A. to New York City, Alba and her husband reportedly slummed it in the back, while their daughter and her nanny enjoyed free booze (JK—neither of them partook, probably) and slightly less punishing conditions.

Kind of like that one time Kim and Kanye were said to have taken an economy-class flight in Armenia when in actuality, it just *looked* like coach, the Brangelina Bunch (sobbing) all loaded onto a flight from Paris to Nice that didn't separate customers by the cost of their tickets. (It was an 80-minute trip.) Egalité indeed.

It's right there in their Rolling Stone profile: "They fly coach, per usual; their destination is a Holiday Inn Express."

Surprised? ::the whole class goes "Nah":: The mad professor of politics has even been known to take the middle seat, which is like, wow, you really would have been the people's president.

Chelsea Peng I'm Chelsea Peng, the assistant editor at MarieClaire.com.
This content is created and maintained by a third party, and imported onto this page to help users provide their email addresses. You may be able to find more information about this and similar content at piano.io
Advertisement - Continue Reading Below
More From Celebrity
See a Rare Portrait of Princess Diana's Mother
Kelly Ripa's Husband Left Her a NSFW Comment
Advertisement - Continue Reading Below
Jennifer Lopez on Learning to Love Herself
Diana's Wedding Interview Footage Is Telling
The Queen May Honor Kate Later This Year
Olivia Wilde & Harry Styles Keep It Profesh on Set
Prince Harry on How Tabloid Attacks Changed Him
Watch Orlando and Katy After Her Performance
Kate Middleton Debuted Long, Straight Hair
Prince Harry's Surprise Inauguration Appearance