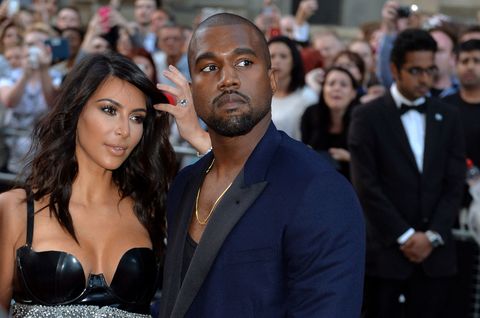 Update: False alarm, guys. Kim's rep tells E! News that is most definitely "the 1st class section of Air France to Armenia" and not economy. So North is probably enjoying her grenadine-spiked soda and chicken fingers a few rows away. Unless she took the photo...

Original post: Like two regular Warren Buffetts but with hand-painted Birkins and no connection to Omaha, Kim Kardashian and Kanye West waved away the services of their private jet to rough it in economy class instead.

The couple, whose combined net worth is estimated to be $155 million, was reportedly spotted occupying an entire row not in the front of a commercial flight to Armenia, according to People.

Observations: 1) That's a long 14.5 hours, unless they've, you know, got a connection somewhere. 2) Kim did put her extensions back in to visit her homeland, so at least the hair's chronologically correct. 3) Where's North? I like to think she's up in first enjoying a stiff Shirley Temple with a side of dino nuggets, plotting her next sartorial victory.

Chelsea Peng I'm Chelsea Peng, the assistant editor at MarieClaire.com.
This content is created and maintained by a third party, and imported onto this page to help users provide their email addresses. You may be able to find more information about this and similar content at piano.io
Advertisement - Continue Reading Below
More From Celebrity
Ryan's Mother's Day Tribute to Blake Is LOL
How Celebrities Are Celebrating Mother's Day 2021
Advertisement - Continue Reading Below
Queen Elizabeth Is Now Selling Beer and Gin
Meghan Markle Wore Carolina Herrera for Vax Live
Princess Charlotte, 6, Tells Everyone She's 16
Meghan Wore Diana's Favorite Watch for Vax Live
J.Lo Sang a Sweet Duet With Her Mom at Vax Live
Meghan Discussed Her Daughter in Vax Live Speech
Prince Harry Talks Digital Pandemic at Vax Live
Harry and Will Have Been Arguing for Months Now