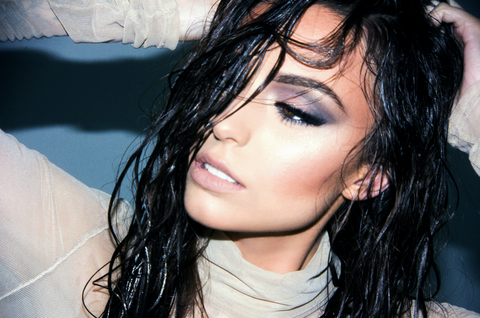 Cher Lloyd is back, and it's zero exaggeration to say she's better than ever. With a new highly-danceable single aptly titled "Activated," the British singer is poised to make an epic comeback—and she's doing it on her own terms.

MarieClaire.com spoke to Cher about what makes her new music so personal, why she's over people analyzing her changing looks (spoiler alert: she hasn't had plastic surgery), and her thoughts on the media's tendency to pit talented women against each other.

"I find it so funny how people that don't write the music, and have no involvement in it, can make such huge decisions on behalf of artists."

Marie Claire: What was it like making this new album coming off of your departure from Simon Cowell's label? What did you do differently and how did you approach it differently?

Cher Lloyd: For the first time in my whole career I've had 100 percent creative control, and that means going into sessions and actually physically writing these songs as a co-writer, and picking the songs I want to be put on this record. Everything form the visuals, to the videos—it's been 100 percent me. That is so important to me, because I feel that my fans deserve to get something that's authentic and real. I find it so funny how people that don't write the music, and have no involvement in it, can make such huge decisions on behalf of artists.

MC: I think a lot of people don't necessarily realize a lot of artists aren't in control of their own brand, or their own music. So it'll be interesting for your fan base to hear the differences on your new album.

CL: Absolutely. I've been incredibly lucky throughout the beginning stages of my career up 'til now, and so lucky to work with the incredible people I've worked with. But I almost feel like that time of my career was the time for me to sit back and learn from people who have been in this business for years and years. To gather as much information and knowledge from those people to then go for it myself.

MC: Most song lyrics have a confessional element, but when you write your own music, do you get to tap into that highly personal side more?

CL: As a writer I'm always mindful that not everyone is going to feel the same way I do about something, so my emotions are just my emotions. But I also like to keep in mind that when other people listen to these songs, they can feel something from them as well, and it's not just my experience. It's the listener's as well. This album is full of things I wouldn't dream of speaking to anyone about. But there's lyrics within this album where I know what I'm saying. I'm able to sing it, but I'm not able to talk about it. There are a couple of songs on this record that I'm probably going to find quite hard, emotionally, to perform.

MC: I feel like when an artist writes a super confessional album, like Beyoncé's Lemonade or basically everything Taylor Swift does, fans inevitably pick the lyrics apart and try to find meaning in them. Is that something you worry about, or is it par for the course?

CL: The way that I always do it is, I wouldn't want to bash anyone. I'm quite mindful of making sure I don't make it so specific that the listener knows exactly who I'm speaking about. If it's a family member or a loved one, I don't feel like I want to do that. I get why people do that and it works, because when you write songs, it's like a release. I don't blame people for doing that, and some of the best songs ever written are because and artist vented, and let up all that pent up emotion. That's what creates amazing songs. But I'm really mindful of not calling anyone out.

MC: On that note, what is "Activated" about?

CL: I think it's the beginning of a brand new phase. A lot of things have changed for me within the past few years. I took some time out from actually being directly in the spotlight to 100 percent concentrate on creating this record. Over that period of time I was so amped up for someone to hear something, and that is what this song is to me. The beginning of a new start. It's a door-opener for the record.

MC: I imagine it must be so strange to be catapulted to fame. Most celebrities have a bit more of a slow growth, but you went from 10 to 100 on The X Factor. Was that a challenge, and how did sudden fame impact you?

CL: The toughest part was my age, I was 16 at the time and I didn't know who I wanted to be. I had a list of insecurities as a 16-year-old girl would. I didn't like the way that my eyebrows were, or my teeth were, and I was on TV. It's just this massive whirlwind of different emotions, and growing up overnight in the public eye. There were parts that were difficult, but at the same time, what an incredible experience to get that much knowledge, and learn so much in such a short space of time. So I really prefer to look at it like that. Although it was an overnight thing, I learned so much, and that's why I'm where I'm at today. I'm incredibly grateful to that show and what they did to help me in my career.

"Everyone is so attached to someone having a spat with another celebrity. It overshadows the good people do."

MC: You had this old-school "feud" with Cheryl Cole that generated so much drama when it happened. Do you feel like that's just another example of talented women being pitted against each other? And does it make you frustrated when you see the same thing happen with other celebrities?

CL: In my case it was stupidity on my part, I was about 17 and I had no filter and my mouth just sometimes ran away with me. I apologized for it, and we've moved on, and all is well. It's just being mindful of what you say, because unfortunately you can do three good things and do one bad thing and everyone's going to remember the bad thing. Like, we're four, five years on from it, and it still comes up, and in that space of time I've done amazing things. It's not the act itself, it's that you'll be remembered for it. Everyone is so attached to someone having a spat with another celebrity. It overshadows the good people do, and the fact that these female artists have such an incredible catalog of music and they look incredible. I would just hate to think they're being talked about badly because of a little spat.

MC: Right, like Katy Perry just released her new single, yet headlines are still mostly about her "feud" with Taylor Swift.

CL: It's sad, so sad. The amount of work that probably went into that song, people should just be appreciating that.

MC: As you touched on a minute ago, there's been so much attention given to your changing brows and your teeth. But you were sixteen. People grow up. There's no one that doesn't look completely different than they did as a teenager. Do you feel like your looks are over-analyzed?

CL: For the most part, it really doesn't affect me. I feel great, I'm happy with my look, and that comes with age and feeling confident. But the main thing I want people to know—and especially my young fans—is that there's been a lot of talk about me having had plastic surgery. And the only reason I want to address it, is because I have such young fans out there reading that about me. I haven't had surgery. I've had my teeth done, which was a massive insecurity for me. But I'm one hundred percent happy. It's difficult, not just for people in the media, but for everyone—young girls and boys—especially in high school. I've always referred to it as the ugly duckling stage, and then you turn into a swan. It's just growing into yourself, and it's absolutely fine.

Mehera Bonner Contributor Mehera Bonner is a news writer who focuses on celebrities and royals—follow her on Instagram.
This content is created and maintained by a third party, and imported onto this page to help users provide their email addresses. You may be able to find more information about this and similar content at piano.io
Advertisement - Continue Reading Below
More From Celebrity
Every Detail We Know About J.Lo & A-Rod's Wedding
Bella Hadid Poses in a Slinky Sequinned Skirt
Advertisement - Continue Reading Below
Andra Day Stuns in a Gray Chanel Couture Gown
Emma Corrin Thanks Princess Diana at the Globes
The Sussexes Have Made a Huge Change to Archewell
Best Reactions to Jason Sudeikis' Globes Speech
Kaley Cuoco Wore a Princess Dress to Globes
Your First Look at Harry & Meghan's Oprah Special
Best Celebrity Instas from the 2021 Golden Globes
J.Lo Looks Impossibly Stunning In a White Swimsuit