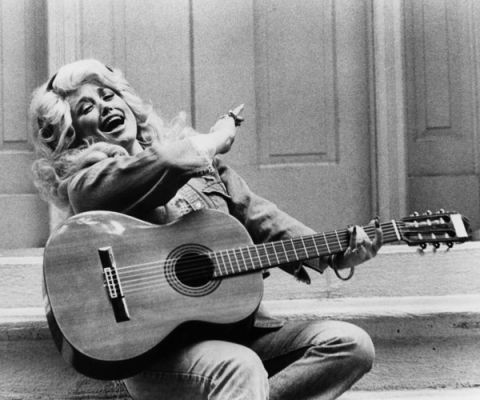 Lily Allen and Dolly Parton have a lot in common. They're singer-songwriters, trailblazers, and above all, unafraid to speak their mind. Of course we'd love to hear the two go tête--tête. Allen has interviewed Parton for British magazine Radio Times and the country singer's sound bites are just as colorful as we imagined.

Naturally, Parton's granddaughter Miley Cyrus was a hot topic, but as always, she had nothing but praise for the audacious 21-year-old calling her "fantastic." In fact it was a segue into further conversation about women in the entertainment.

"Women have got a long way to go, but I really think we've made a lot of great strides since Jane Fonda [and Parton herself] starred in 9 to 5," said Parton. "I felt I was part of a whole new movement, especially in the workplace. There are a lot of wonderful women out there doing a lot of wonderful things."

This said, while Parton has thrived as a strong, independent women, she has also been empowered by the men in her life.

"I think women have been accepted a lot over the years. It has more to do with your attitude, your personality and your talent," she explained. "I never had those problems. It served me well, being a girl, and being brought up in a family of men. Six brothers, my dad, close to all my uncles. So I know men, I love men, I understand men."

Another talking point was Parton's forthcoming performance at Glastonbury this weekend. It's her first time hitting the music festival and she has cold — alebit heel-clad — feet.

"What should I expect?" she asked, jokingly. "Mud? I'll be wearing my high heels, even if I'm up to my knees in mud. I'm a little bit apprehensive. I'm excited, I just want to make sure I do the right show. I've heard of Glastonbury because it's one of the biggest in the world, right? For years, everybody's asked me why I've never done it, and I guess it's never worked out where I could, and so now I am."

We don't know exactly what Dolly has in store, but we do know one thing: the Brits are in for a treat.