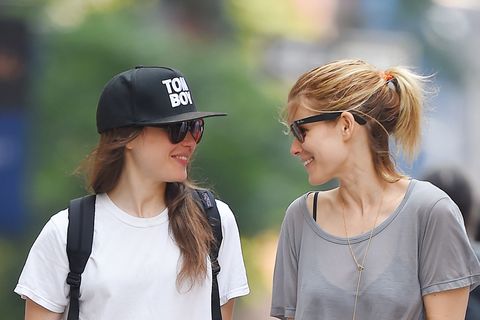 If there's one person who emphasizes manners above all else, it's got to be the Queen of England. But if there's one thing we know about Ellen Page, it's that she doesn't stand on ceremony, especially when it comes to fighting for a cause that she believes in.

Since officially coming out in February of last year, the Oscar-nominated actress has been vocal about the importance of being able to express your sexual identity and has been active in the fight for LGBT rights.

So when a Vice article went up reporting that the Queen was giving an MBE (Member of the Most Excellent Order of the British Empire) to Maurice Mills, a Northern Irish politician who has reportedly blamed both Hurricane Katrina and AIDs on gay people, Page took to Twitter to post a succinct but strong response:

Fuck that indeed. According to The Guardian, the born again Christian politician once said that Hurricane Katrina was God's revenge for letting New Orleans carry out its annual LGBT celebration: "The media failed to report that the hurricane occurred just two days prior to the annual homosexual event called the Southern Decadence festival which the previous year had attracted an estimated 125,000 people. Surely this is a warning to nations where such wickedness is increasingly promoted and practiced."AIDs? Well that's the result of the "filthy practice of sodomy."

So, yeah, no big surprise that this didn't sit well with our girl—or anyone else who cares about humanity, for that matter.

Ellen Page's Coming Out Speech Will Make You Cry

Why Gay Marriage Is Good for Straight Women

This content is created and maintained by a third party, and imported onto this page to help users provide their email addresses. You may be able to find more information about this and similar content at piano.io
Advertisement - Continue Reading Below
More From Celebrity
Will & Harry to Walk Together at Philip's Funeral
Beyoncé Wore Tweed Micro Shorts for Date Night
Advertisement - Continue Reading Below
Kristen Stewart's GF Gushed About Her on Insta
Prince Charles Addresses Prince Philip's Death
Prince William Pulls Out of 2021 BAFTA Appearances
J.Lo Wears a Crop Top and Gold Joggers on Set
Prince Philip Said He Had No Desire to Live to 100
JT Is in the Throwback Pic Britney Posted on IG
The Queen Was by Prince Philip's Side When He Died
Prince Harry Is "Really Upset" Over Philip's Death