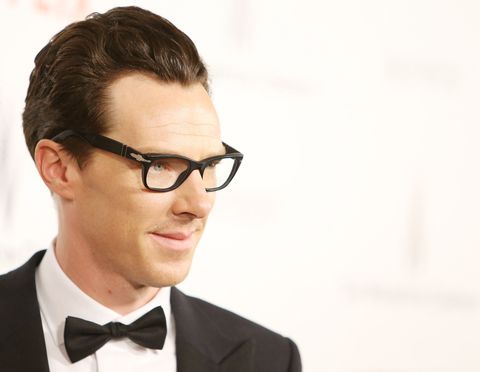 As if you needed another reason to adore Benedict Cumberbatch, the man is unabashedly well versed in the super powers of concealer.

"Makeup is a wonderful thing for men as well as women," he said via The Cut. The British actor and resident heartthrob sung the praises of makeup at the Golden Globes, where he used it to cover his jet lag. "I literally landed about an hour before the ceremony started," he added.

While he wasn't the only tux-clad gent to put his face on for the award show—Joshua Jackson donned Laura Mercier primer and a little Jouer Perfector foundation, according to The Hollywood Reporter—it's still a relatively surprising confession from one of Hollywood's leading man. This, not in view of the fact that he's wearing it, but simply because he's so forthcoming about it.

We hope that Cumberbatch inspires other actors to be just as frank about their pre-award show beauty rituals, because we believe there should be just as much transparency for men, as there is for women.

Now, one question: are these guys dipping into their lady friend's handbags, or do they have their own makeup stashes we need to know about? If that's the case, we happily nominate Cumberbatch to be Into the Gloss' next Top Shelf subject.

Our 10 Favorite Beauty Looks From the 2015 Golden Globes

An Ode to the Golden Globes: 7 Reasons It's Better Than the Oscars