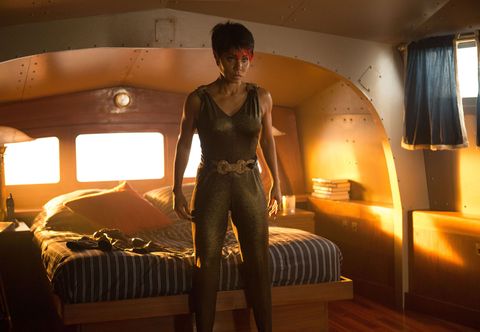 Well, this is amazing. In an interview with People, Jada Pinkett Smith revealed that in her 20s, she wrote a comic book character who was black, female, and—from the sounds of it—a badass with a heart of gold.

Smith, who plays Fish Mooney in Gotham (the FOX show about the beginnings of Batman), says her comic dreams were crushed when the company she was in talks with went under.

"Yeah, I wrote it...She was called Menace, and she was this character who was doing a lot of bad stuff. She died in a drug deal gone bad, and, as she's about to die, an angel comes to her, and he basically says, 'Listen, I will return your life to you if you take this opportunity to redeem your soul,'" the actress told People.

"So she takes the deal...and she just has this struggle between dark and light."

When asked if she ever thought of turning the concept into a feature film, the star was enthusiastic, but also pragmatic: "You know, I really have, but I always struggle with the idea of like, 'Oh man, it's a black female character,' and just dealing with the politics of, like, 'Will a studio make a black character like that?'"

First off: Not only does a female superhero movie sound like something we can definitely get behind, but the idea of creating a role for a black woman is just icing on the cake. As we wrap up awards season, where diversity in Hollywood has become a hot topic, having a strong female black lead created by a black woman (and not a white writer) is something we need a little more of right now. As Viola Davis said when she won her SAG Award for her complex lead role in How to Get Away With Murder, "When I tell my daughter stories at night, invariably a few things happen. Number one, I use my imagination. I always start with life and I build from there," she said.

"And then the other thing that happens…she always says, 'Mommy can you put me in the story?' It starts from the top up, so I'd like to thank Paul Lee, Shonda Rhimes,Besty Beers…and Pete Nowalk...for thinking that a sexualized, messy, mysterious woman could be a 49-year-old dark skinned African-American woman who looks like me."

Bottom line: We need women in big roles. We need these women to have different backgrounds. And we need to start seeing it as the "norm."

Because all women deserve to kick a little ass.

7 Actresses on How to Bring Gender Diversity to Hollywood

TV's Most Kick Ass Women Sound Off at Comic Con

Samantha Leal Senior Web Editor I'm Sam, the senior editor at MarieClaire.com.
This content is created and maintained by a third party, and imported onto this page to help users provide their email addresses. You may be able to find more information about this and similar content at piano.io
Advertisement - Continue Reading Below
More From Celebrity
Meghan Made a Surprise Appearance on AGT
Gigi Hadid Has Given Birth to a Baby Girl
Advertisement - Continue Reading Below
The Palace Just Subtly Shaded Prince Harry
Kristin Cavallari on Why She Divorced Jay Cutler
Simone Biles Shows Off Sculpted Abs In Bikini Pic
Meghan Nailed Workwear Chic in a Brown Silk Shirt
Did Emma Stone Secretly Marry Fiancé Dave McCary?
Kate Wore a Necklace in Tribute to Her Children
Meghan and Harry Made a Rare TV Appearance
Kate Middleton Wore a Playful Fall Look