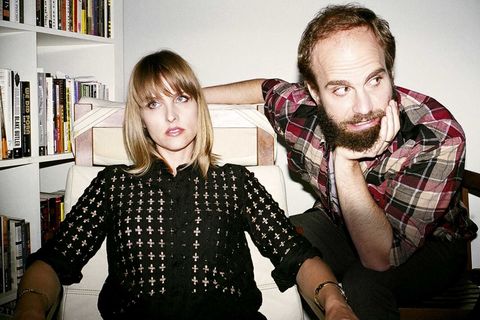 With new webisodes on Vimeo this month, High Maintenance co-creator and writer Katja Blichfeld dishes on being the lady behind a hit stoner-devoted Web show.

Marie Claire: Who had the idea for the show, you or your co-creator and husband, Ben?

Katja Blichfeld: Neither of us can remember, which shows how we share a brain. It dawned on us that weed delivery would be a great storytelling device because it happens in five minutes. And Ben could be the delivery guy ("The Guy"), because then he would be in every episode.

MC: Women in weed culture is fairly new. Why?

KB: It's a weird puritanical holdover. There's so much working against women that to be an admitted drug user might feel like a setback. Ben and I have been regular users for years. Most of my girlfriends are pot smokers, hold big jobs, are productive members of society. It seemed important to represent that.

MC: What response have you gotten from dealers and friends?

KB: In one episode somebody tips The Guy; one of our dealers told us people are tipping him now! A friend of a friend started buying weed, and it seemed like they had gotten all their info about delivery from the show. They assumed a dealer would stay and roll joints if you didn't know how. We had to say, no … that's just The Guy.

MC: Most of your career you've spent as a casting agent. How did you get into that?

KB: I was just floating, in my mid-twenties, didn't really know what I wanted to do. I was working a dead-end administrative job, but I always had this dream in the back of my mind to become a casting director. I came to New York and had my little list of 10 casting directors I wanted to work for. Jennifer McNamara was one of those. She had just come off of Sex and The City, and luckily she needed an intern. The rest is history. I worked with her on and off for almost 10 years. I started as an intern, became her assistant, then her associate. I was working on 30 Rock, and mid-way through I got promoted to Casting Director.

MC: How did you go from casting to creative?

KB: I always harbored secret dreams of being a writer. I think I had self-confidence issues. I would write these epic emails to friends, retelling what was happening in my life. Like essay-length emails. I came to realize that I could write and this was just sort of my low stakes way of doing it. I met Ben a little over five years ago. He was sort of a muse for me. He's a performer and was super charismatic and I really wanted to create something with him that he could star in. When I realized he knew how to run a camera and edit I thought, why, why not? We could make something for the internet. It's low stakes. It would give me a creative outlet, and it would become like a calling card for me as a casting director. But after a few episodes it became really clear that we had the goods!

MC: How is to to work with your spouse?

KB: The benefits are that we're together all the time, and so if one of us has an idea we can get the other one involved. Ben and I know each other so deeply that when we communicate  we don't have to be as explicit. There are definite drawbacks. We never feel like we can totally escape our professional life. The topics of conversation in our relationship are becoming more and more limited. We're making a real effort to broaden our universe and get it back to a more interesting place. Also, there's no poker face. If one of us has an idea that the other doesn't like, we can say all the nice things we want, but tone and gestures can totally set off a lot of emotions. But with the way the show has been received and all the good things that are happening, it wouldn't be as sweet if it was just one of us that was getting to enjoy all that. It could really get under my skin if he was off enjoying all of this, and I was clocking into a job every day. I'd be happy for him, but…I won't have to find out, will I? [laughs]

MC: The show eventually got picked up by Vimeo, and it seems like they've given you creative carte-blanche. Is that right?

KB: It's really incredible. We had an FX deal and we were in development with them for almost a year, to turn the show into a half-hour version. Ultimately they passed on us, and it was a relief, not crushing, because during that process it was weird to be getting all this input on stories that were personal to us. At Vimeo it was such a relief that they were so hands off, and were basically just writing a check and saying please just keep doing this the way that you're doing it, but with a budget. The budget for six episodes is still less than what we would have received for one episode [on FX]. But it felt more appropriate as a next move than to go from  super homespun web series to a big budget cable show.

MC: Do you think the show will be affected by changing marijuana legislation?

KB: We're not really worried. My parents live in Washington state. After it became legalized there we still had trouble obtaining some. I think there will always be a lot of people who don't want to go through a bureaucratic  or "legal" channels to get their weed. There's people who work in law enforcement or clergymen, people who for legal reasons cannot be using mind-altering substances, who won't want to go on the record as being a purchaser. I don't think "The Guy" will be put out of business quickly.

This content is created and maintained by a third party, and imported onto this page to help users provide their email addresses. You may be able to find more information about this and similar content at piano.io
Advertisement - Continue Reading Below
More From Celebrity
Camila Cabello's Hair Has *Never* Been This Short
Diana's Note About Her BBC Interview Is Missing
Advertisement - Continue Reading Below
Melania Didn't Want to Hold Trump's Hand Again
Twitter Is Living for Blue's Cameo in New Video
Will *Hated* How Archie's Birth Was Handled
Hear Adele's American Accent in This 'SNL' Promo
Meghan and Harry's Super Famous New Neighbors
Ryan Trolled Blake Over Those Drawn on Shoes
Charles Caused Chaos at the Queen's Coronation
Noah's Naked Bodysuit Look is Everything