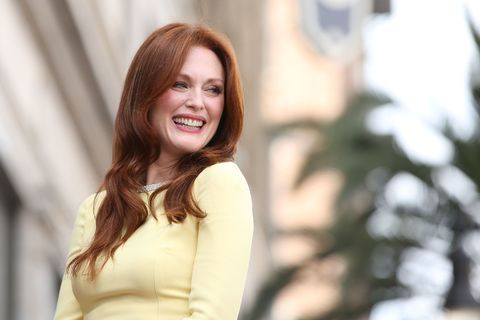 In a quite hilarious (and confusing) revelation, Turkey is just not impressed with Julianne Moore. Besides the fact that she won an Oscar for Best Actress in 2015, that she's received four other Academy Award nominations, won two Golden Globes out of eight Golden Globe nods, won two SAG awards out of seven SAG nominations, and won one BAFTA out of four BAFTA nominations, and well, a slew of other acting nominations—in the eyes of the Turkey tourism board, Julianne Moore, your acting is just not up to par.

The 54-year-old was dropped from the country's Culture and Tourism Ministry after inking a deal to become the face of Turkey for various promo spots and ads. Turkey's Hürriyet Daily News reports that executives were not into Moore's "poor acting" in a promo film, and demanded that the actress do a reshoot. When Moore declined, they dropped her from the project.

According to reports, Moore's participation was always slightly controversial. Politicians from Turkey had a problem with her "depressive persona." (Side note: What? Are we talking about the same can't-stop-smiling Julianne Moore?)

Ad execs had full faith in her, however, and said that she appealed to Americans and Brits, as well as women and the other segments of tourists they wanted to reach.

"I can't understand why she is not liked here," Iconisus & I Mean It owner Emre Yücel told Hurriyet last year.

Is this the matrix? Everyone loves Julianne Moore! We can't understand this either, Yücel. You're not alone.

5 Reasons You Shouldn't Fear Getting Fired

Samantha Leal Senior Web Editor I'm Sam, the senior editor at MarieClaire.com.
This content is created and maintained by a third party, and imported onto this page to help users provide their email addresses. You may be able to find more information about this and similar content at piano.io
Advertisement - Continue Reading Below
More From Celebrity
Iconic Party Photos From the Past
The Best TV and Movie Wedding Dresses of All Time
Advertisement - Continue Reading Below
40 Celebrity Sisters Who Look So Much Alike
40 Rare Photos of Grace Kelly Through the Years
A Look at Royal Family Portraits Through the Years
The 50 Most Popular Episodes of ‘Friends,’ Ranked