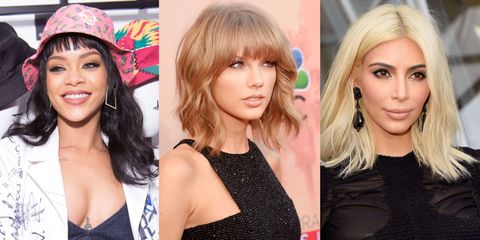 Recently, I was confined to a room and forced to say phrases like a giant who's had one too many slushy drinks adorned with paper umbrellas. Why? Because otherwise, I would have never confirmed my suspicions I have a pleasant tone quality *whispers* and a vocal-fry problem.

Since I was subjected to such scrutiny, it was only fair (okay, not really) we turn the tables and give the same treatment to a bunch of celebrities. Here, Carrie Faverty, casting director at Sound Lounge, analyzes seven famous people's voices as if she were going to hire them to do voiceover work for Huggies or the dancing narwhals or any other commercial you see on TV.

"Blake almost sounds younger than her age—she could even pass for a high-schooler. She does have a bit of a nasal quality to her voice, but you only really catch it when she's talking fast. She would definitely be someone I'd audition for a product geared toward teens and young adults: make-up products, tampons, and iPhones are all in her voice's wheelhouse."

"Emma's accent initially makes you think she's older and posh and reserved, but you can hear her smiling the whole time she speaks, and that really brings out her age: She sounds like a teenager. When she starts talking quickly, her voice pitches up, but she catches herself and drops down into her lower register, giving the vocal appearance of maturity. As a voiceover artist, Emma would sell to teens, but for products that have a bit of class to them. Think perfumes or clothing."

"Kim is very L.A.-sounding, meaning she speaks through her nose and only uses her upper register. She has a child-like quality to her voice and a tendency to go up at the ends of her sentences. [Editor href='https://www.marieclaire.com/career-advice/news/a13897/whats-wrong-with-my-voice/' target='_blank">We can help you, Kim! She\'d be hard to direct in commercial voiceovers, so she\'d probably do better in the world of animation doing a more exaggerated version of her own voice and delivery."

"Katy sounds so young, but unlike Kim Kardashian, it doesn't seem like she's putting it on: She's got a rasp that makes her voice stand out and keeps it from sounding fake. But if I didn't know who she was, I'd think she was 16 years old. She also has a tendency to pitch her voice up sometimes, but with her texture, it almost makes her voice 'squeak.' Katy would do well in commercials and animation. She could sell school supplies or some youthful cosmetics like nail polish. And because of the young squeak in her voice, she could also do kids' animation."

"She over-enunciates certain words, which gives her speech a really direct quality. Even though she sounds like she's in her early 20s, there's nothing immature about Rihanna. She's direct and in control when she speaks, and that's mostly due to her calculated delivery. As far as voiceovers, I think she'd be able to sell anything from cars to shoes, anything that requires a direct and observant delivery."

"What I found most surprising is that, even though she's a young performer, there's a richness and maturity to her voice. She sounds as if she is in her 30s, not early 20s. At no point does she pitch her voice up to sound 'girlie,' even when she's telling jokes, and she maintains that lower register when she gets excited too. She'd be great at doing voiceovers for young moms, something for Huggies or Tylenol—anything that needed some warmth to the voice and a lot of maturity."

What Your Eyebrows Say About You

What's Wrong with My Voice?