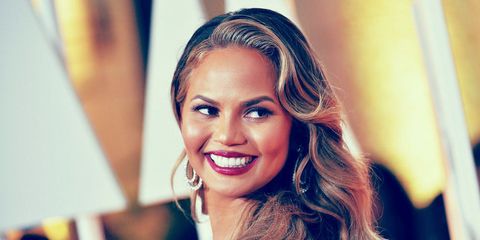 Update, 4/24: In an interview airing Friday on The Meredith Vieira Show, stretchies pioneer Chrissy Teigen reveals why she posted the photo that launched a thousand sighs of relief/contentment.

"I was actually just taking a picture of the bruises and then I saw the stretch marks in there," she said of her self-proclaimed clumsiness in the kitchen. "I have those apps, the Facetune and Photoshopping ones, and I just didn't feel like doing it anymore—and I'm never doing it again, because I think we forgot what normal people look like now."

As expected, screens all over the world were double tapped, friends were tagged, and thousands of women flocked to the comment section to thank the celebrity and model for her realness. The gist: "I love you even more now, and I wish other famous people were brave enough to do this."

This isn't the first time Teigen has shared a part of her body that might usually be covered with extra-strength foundation/Photoshopped into oblivion. Shortly after she married John Legend in September 2013, she uploaded the original stretchies pic, below.

Brava, Chrissy Teigen. May you and your stretchies continue to inspire us all.

9 Celebrities Who Are Just as Injury-Prone as We Are

Khloe Kardashian Is Writing a Self-Help Book, Hopes to Encourage Confidence in a "Culture That Worships Skinny"