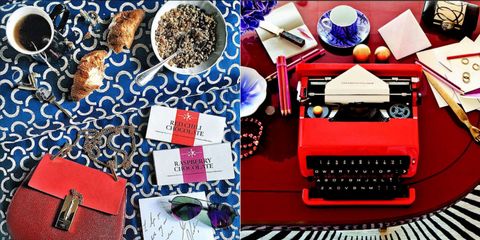 It's the, "Oh, look, everything fell out of my Chloé Drew bag and just happened to land on my Acne jacket, and apparently I carry emergency Gaia Repossi ear cuffs around in case my pinna feels too naked or something." It's every single #dailycortado. It's the aerial brunch shot with, like, nine different dishes (who orders that much?) artfully arranged atop a tablecloth with no perspiration rings or dribbles of shakshuka sauce probably because the photographer spent so long art directing and food styling and making sure the light hit the glasses at a 53-degree angle that the yolks set and everyone left to go get $1 slices across the street.

Our discussion about vignetting cannot come at a more appropriate time, given that both Drake and Kanye West are now considered curators—of art. I, however, get the appeal of projecting to the world that you live an arranged, deliberate, purposeful life, which is why I won't trouble you with questions such as, "Whatever happened to sprezzatura?" and "Why won't you just let me EAT MY TOAST SOLDIERS IN PEACE?" any longer. Just because it goes against everything I believe in doesn't mean I don't know how to do it, okay?

Here's how. Your Instagrams will thank you.

I raided the mini bar for some breakfast in bed.A photo posted by Patrick Janelle (@aguynamedpatrick) on Feb 7, 2015 at 7:21am PST

This isn't Instagram—it's war. So start thinking like Sun Tzu. Find your way to anywhere—though an chichi hotel/restaurant/historical landmark is preferable—and use whatever photogenic props necessary to get your point across: that even a random breakfast of Veuve, macarons, and cashews can be an adventure, because it's not what you eat—it's your attitude. (Plus you're flying to Copenhagen expressly to eat at Noma in two hours anyway.)

3⃣2⃣1⃣ Counting down to one of my favorite show. I can't sit still I'm sorry. #yoyoforlofficielA photo posted by @yoyokulala on Mar 9, 2015 at 9:27am PDT

Might as well stick your hand in like, "Haha. We all know it took 46 minutes to make this look like it happened naturally." It's self-deprecating! Plus it reminds everyone jewelry scattered over show invites doesn't happen on its own—it takes a lot of effort. Which is commendable.

Harken back to a simpler time, but not TOO often

Take time to be thoughtful. Give love. XkA photo posted by Kelly Wearstler (@kellywearstler) on Nov 6, 2014 at 4:20pm PST

Not by taking a single blurry shot of what you're doing while you're doing it—God no. Instead, procure obscure accessories like candy apple red typewriters and make them the focal point of one picture this week and put them somewhere in the background of another in 16 days so your feed doesn't feel too monotonous. Also make sure to vary composition and throw in a pic with a lot of negative space once in a while. I'm serious—you don't want to have two of the same type in a row.

I mean, if you're going to use the vignette as an opportunity to "open a window onto your life," you open that window and let all the leaves and pigeons and whatever fly in. Bring those chocolate bars. Pack that calligraphy-ed thank-you note from...not that moment. Hell, if you had a really good bagel the day before, save the last nubbin and chuck it on the table too. (Kidding, but if you really liked it enough to keep it, might as well show it off. Social media favors the bold.)

While I was in Milan, @kristiedash did a beautiful job of remerchandising my coffee table. 🙌🙌 to her and to @mcgrath2, my glorious decorating team.A photo posted by Eva Chen (@evachen212) on Sep 23, 2014 at 9:25am PDT

Three and a half things: 1) This sounds like a textbook I would never open. 2) Trust your taste. See that Playboy in bottom row? That plus the Proenza print plus the Ladurée cookbook equals visual and personal interest. I would throw in a Sweet Valley High. 3) Straight lines are relaxing, but save for special occasions because they can also come across as contrived. On another note, wouldn't it be nice to have assistants who could make your little book towers so you had more time to do the important stuff? (See above.)

Where to Shop For Your Apartment *Besides* Ikea

Chelsea Peng I'm Chelsea Peng, the assistant editor at MarieClaire.com.
Advertisement - Continue Reading Below
More From Fashion
Spring Dresses to Buy Before They Sell Out
Katie Holmes Wore a Cool Pair of Oxford Shoes
Advertisement - Continue Reading Below
What the Founder of Lingua Franca Wears to Work
The Best Grammys After-Party Outfits
The Spring Trends That'll Shake Up Your Wardrobe
Behold: The Sexiest Looks at the 2020 Grammys
The Best Red Carpet Looks at the 2020 Grammys
Shop Kate Middleton's Personalized Charm Necklace
PSA: Anthropologie Is Having a Sale All Weekend
Treat Yourself to These Pretty Lingerie Pieces