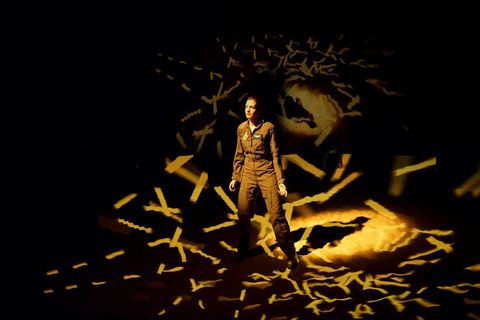 Anne Hathaway has come a long way from The Devil Wears Prada. The Oscar winner's latest role is gritty, fierce, and severe—and she's on stage by herself the entire time.

Grounded, written by George Brandt and directed by Julie Taymor, runs through May 24 at the Public Theater in New York. The play has already been staged across the country with different actors and directors, but Hathaway's definitely the biggest star involved so far.

In the one-woman show, Hathaway stars as a star fighter pilot who drops bombs over Iraq and Afghanistan, but finds herself reassigned to fly drones after she gets pregnant. Her character, who stays unnamed, starts to feel the mental effects of the "chair force," sitting in the suburbs while her actions kill people overseas.

Naturally, Hathaway has been getting great reviews for her "masterful" and "full-throttle" performance. Though critics say it's hard to separate the star from the character, they admit you need someone who can go big like she does to command the stage by herself.

Hathaway told the New York Times that she was inspired by stories from family friends who were in the army. "I realized I had absolutely no idea what life was like for a female soldier," she said. "I hadn't seen movies about it, I hadn't really read articles about it, I didn't have any references, and I thought that's not O.K. So I started looking for stories about female soldiers to tell." She says she visited an Air Force base, flew test drones, and spoke with female fighter pilots.

Her play isn't just there for spectacle, either. The theater is hosting a panel, "Our Drone War," to discuss the heavy themes that the show introduces. "A devastating weapon that also keeps our soldiers out of harm's way—the ultimate military dream" the theater's website notes. "But the reality of drone warfare isn't at all what we imagined."

This content is created and maintained by a third party, and imported onto this page to help users provide their email addresses. You may be able to find more information about this and similar content at piano.io
Advertisement - Continue Reading Below
More From Celebrity
Chrissy Teigen Shared a Cute Tom Hanks Story
Gigi and Zayn Finally Reveal Their Daughter's Name
Advertisement - Continue Reading Below
Rihanna Takes Out the Trash on Trump's Last Day
Chrissy Teigen Shared a Moving Post About Sobriety
Meghan's Royal Aides to Testify in Her Court Case
Greta Thunberg Hilariously Trolled Trump—Again
Watch Demi Perform During Biden's Inauguration
Joe Biden Follows Chrissy Teigen on Twitter
J.Lo Wore Head-to-Toe Chanel for the Inauguration
The Queen Sent a Private Message to Joe Biden