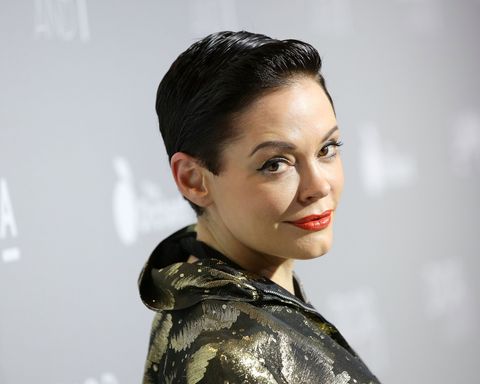 The numbers don't lie: Sexism in Hollywood is a real, quantifiable problem that a growing number of kickass women—including Olivia Wilde, Meryl Streep, and Patricia Arquette—are working hard to combat. Rose McGowan is the latest to join their ranks, delivering an impassioned, stirring speech that outlines seven ways women in the film industry (and outside of it) can beat gender inequality.

Speaking to the Sisterhood of Travelling Producers, an invite-only group of young female producers and executives, McGowan emphasized not letting misogyny go un-reprimanded and recognizing that women make up 50 percent of the movie-going audience. The two most universally relevant points:

"If someone yells at you or puts you down, stop them in their tracks. Retrain them. If someone says your name wrong, you correct them, so why don't we do it when mistreated? Correct bad behavior as it happens. If Scott Rudin throws a phone at your head, throw one back and throw it harder. No one gets to abuse you."

"It is imperative that we start seeing women on film in other roles than The Wife or The Sexpot. How boring. Let's reflect on film what society ACTUALLY looks like: 50% female. Women are in all kinds of jobs and have complex lives, so put that on the screen. I'm curious about the plumber who says two words on film if she's a woman. What's her story? How'd she get there? People love relating to other people onscreen. So why aren't we women allowed to relate to our own lives? Where is our representation? Let's take action to change these tropes. It is time."

Read all seven of McGowan's points here—it's worth it.