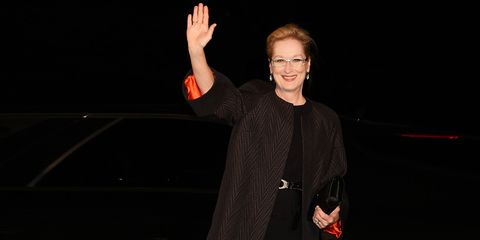 Variety reports that Streep is personally funding a screenwriting workshop exclusively for women over 40. The project was announced on Sunday during a panel at the Tribeca Film Festival.

Streep's project will be called The Writers Lab, and will be run by New York Women in Television and Film. The program has already recruited a slew of mentors, including the women behind movies like Boyhood, 10 Things I Hate About You, and The Station Agent.

The lab will take place at a retreat in upstate New York from September 18-20, and promises participants a "springboard" to produce their promising films. The Writers Lab will take applications from April 30 until June 1, and will accept only eight participants.

The announcement comes at a pressing time for women in Hollywood. Even though it's 2015, it's still depressingly tough to be a woman writer, and female character leads aren't getting any more common.

But if Meryl's on the case, we already feel better. She can fix everything, right?

This content is created and maintained by a third party, and imported onto this page to help users provide their email addresses. You may be able to find more information about this and similar content at piano.io
Advertisement - Continue Reading Below
More From Celebrity
How Much Did Prince Harry Inherit From His Mother?
Amanda Gorman Says a Security Guard "Tailed" Her
Advertisement - Continue Reading Below
Meghan and Harry Share a Sweet Home Video
Harry Left Royal Family Due to "Lack of Support"
Why Prince Harry Asked the Royal Family for Help
Prince Harry: "I Think My Mum Saw It Coming"
Prince Charles "Stopped Taking" Harry's Calls
Harry & Meghan's Tell-All: Everything You Missed
Meghan and Harry's California Home: What We Know
Meghan Markle Is Having a Girl This Summer