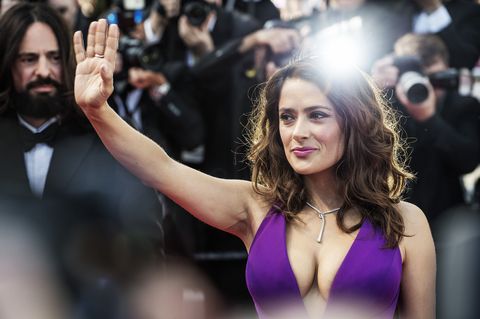 Salma Hayek is getting real when it comes to battling sexism in film. Speaking at the Variety and UN Women's panel discussion on gender equality during the Cannes Film Festival, the actress was not holding back in her critique of the industry and the challenges women face, on screen and off.

"For a long time they thought the only thing we were interested in seeing were romantic comedies," she said when asked about female audiences, according to TIME. "They don't see us as a powerful economic force, which is an incredible ignorance."

But according to Hayek, getting more females in the industry is only half the battle. The other half is fought with the purchase of movie tickets and number of streams.

"Our pay can never go up because we never get the opportunity to show what we can bring in revenue. We can't stand as victims and say we need to make them aware of women. Because guess what? They don't care," she said, according to The Telegraph. "There's only one thing that inspires the people and the power in the industry, and that's money. They have to understand how powerful we are economically."

Boom! We just hoped she dropped her mic after that one.

Samantha Leal Senior Web Editor I'm Sam, the senior editor at MarieClaire.com.
This content is created and maintained by a third party, and imported onto this page to help users provide their email addresses. You may be able to find more information about this and similar content at piano.io
Advertisement - Continue Reading Below
More From Celebrity
Meghan Said She Was "In Tears" Over Her BLM Speech
Chrissy Teigen Couldn't Hear Her Baby's Heartbeat
Advertisement - Continue Reading Below
Taylor Swift Fans Troll Jake Gyllenhaal on IG
Meghan Shared a Quote She Displayed in Her Room
Duchess Kate Spots Sleek Sportswear for Outing
Brooke Shields, 55, Shows Off Toned Legs On Insta
Amanda Seyfried Gave Birth to Her Second Child
Chrissy Teigen Received Two Blood Transfusions
Attenborough's Gift to George Sparks Controversy
Meghan and Harry Respond to Reality Show Rumors