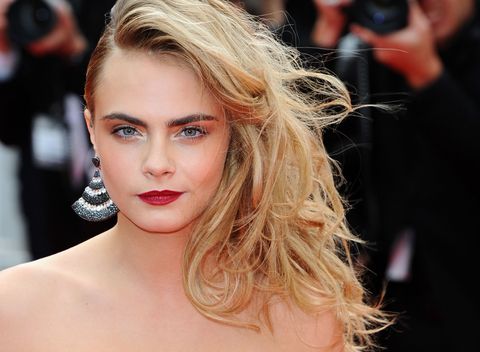 Cara Delevingne is not playing around when it comes to auditions—she's starring in Paper Towns, Pan, Suicide Squad, and now she's booked yet another film: Valerian. (Oh, you know, and she has that whole modeling thing.)

According to Variety, the actress/model/non-sleeper has signed on for the graphic novel film adaptation, which is set in the 28th century after humans discover time travel. She'll play Laureline, sidekick to Valerian (played by Dane DeHaan)—both space agents, if you will. The story was created by Pierre Christin and Jean-Claude Mezieres in 1967, with the final story published in 2010. It's been translated into 21 languages and has sold over 10 million copies, so this is a pretty safe bet in the blockbuster department.

The film will premiere in July of 2017. Better grab a quick nap while you can, Delevingne.

Samantha Leal Senior Web Editor I'm Sam, the senior editor at MarieClaire.com.
This content is created and maintained by a third party, and imported onto this page to help users provide their email addresses. You may be able to find more information about this and similar content at piano.io
Advertisement - Continue Reading Below
More From Celebrity
Hailey Wore a Nude Blazer and Micro Dress
Gabrielle's TikTok About Her Prom Date is So Funny
Advertisement - Continue Reading Below
Victoria Beckham Shuts Down 'Spice World 2' Rumors
Kendall Jenner Shared Her Experience of Anxiety
'The Voice' Star Blake Shelton Opens Up About Gwen
Sussexes Share New Birthday Photo of Archie
Charles Is Still Upset Over Harry's Oprah Tell-All
Meghan and Harry Share New Archie Photo
The Cambridges Share Their First Full YouTube Vid
Courteney Cox Said the 'Friends' Fountain Was Grim