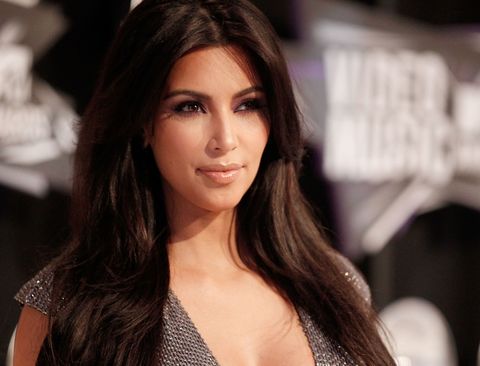 So we were going down the internet rabbit hole the other day—which is what we do every day because it's our job (#blessed)—and we found something glorious. Something we can't believe we ever forgot about.

Let's take a trip back to 2011, when Beyoncé announced her pregnancy, we all wore colored denim, and nothing hurt. In this year, mankind was blessed with a debut like none other: That of Kim Kardashian, singing a song that producers clearly wanted someone to play in a club—"Jam (Turn It Up)." In the accompanying music video, which was leaked and didn't even include the whole song (what?), Kim wears wet-look eye shadow and glossy lips and she poses, like, a lot.

Here are the three things you need to know about this masterpiece, by way of the lyrics:

1) Kim's drink of choice in da club? Rosé...followed by five shots of tequila.

2) When Kim gets drunk, she sees angels in her eyes since the buzz got her way up in the sky. Sounds about right.

3) At one point, she rhymes "club" with "good." Knew that high school poetry teacher was onto something with that whole forced-rhyme business...

The song, which was produced by The-Dream (who admits it was all his idea), has two silver linings: All the proceeds were donated to St. Jude's Hospital and Kim herself realizes how ridiculous it all was, saying in an interview with Andy Cohen on Watch What Happens Live, "It's definitely a memory and it was a fun experience. We gave the proceeds to a cancer organization. But if there's one thing in life that I wish I didn't do...I don't like it when people kind of dabble into things they shouldn't be. And that I don't think I should have. Like, what gave me the right to think I could be a singer? Like, I don't have a good voice."

Don't beat yourself up too much, Kim. This is possibly the best gift you could have given us.

This content is imported from YouTube. You may be able to find the same content in another format, or you may be able to find more information, at their web site.
Samantha Leal Senior Web Editor I'm Sam, the senior editor at MarieClaire.com.
This content is created and maintained by a third party, and imported onto this page to help users provide their email addresses. You may be able to find more information about this and similar content at piano.io
Advertisement - Continue Reading Below
More From Celebrity
Iconic Party Photos From the Past
The Best TV and Movie Wedding Dresses of All Time
Advertisement - Continue Reading Below
40 Celebrity Sisters Who Look So Much Alike
40 Rare Photos of Grace Kelly Through the Years
A Look at Royal Family Portraits Through the Years
The 50 Most Popular Episodes of ‘Friends,’ Ranked