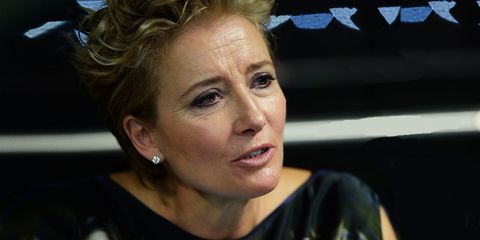 Emma Thompson is not impressed with Hollywood. The 56 year old, who plays a 77-year-old prostitute in her new film The Legend of Barney Thomson (see the awesome trailer below), has *things* to say about the pressures on women in Hollywood and how they've changed since she started acting as a young woman. (Spoiler alert: Nothing has really changed.)

"I think it's still completely shit actually," she told Radio Times. "I don't think there's any appreciable improvement and I think that for women, the question of how they are supposed to look is worse than it was even when I was young. So, no, I am not impressed at all."

She also admitted that the fact that she plays a character 20 years her senior is a bit ridiculous. "It would be really nice to get someone who is actually 77 to play her, but it's a wildly comic role and I couldn't resist," she says.

"When I was younger, I really did think we were on our way to a better world," Thompson continues, "and when I look at it now, it is in a worse state than I have known it, particularly for women, and I find that very disturbing and sad."

This content is imported from YouTube. You may be able to find the same content in another format, or you may be able to find more information, at their web site.
Samantha Leal Senior Web Editor I'm Sam, the senior editor at MarieClaire.com.
This content is created and maintained by a third party, and imported onto this page to help users provide their email addresses. You may be able to find more information about this and similar content at piano.io
Advertisement - Continue Reading Below
More From Celebrity
Dolly Parton On the #FreeBritney Movement
Will & Kate Are Nervous About George's Future
Advertisement - Continue Reading Below
George Won't Be Forced to Go to Boarding School
Diana Would Have Written a Memoir Too, Friend Says
A Slice of Diana's Actual Wedding Cake Is For Sale
Matt Damon Trolled Ben Affleck and Jennifer Lopez
This Old Video of the Queen Saying "Nah" Is LOL
Diana Had a Secret Message on Her Wedding Shoes
Will's Friends Made "Jibes" About Kate's Mom
William Will Suffer "Worst" from Harry's Memoir