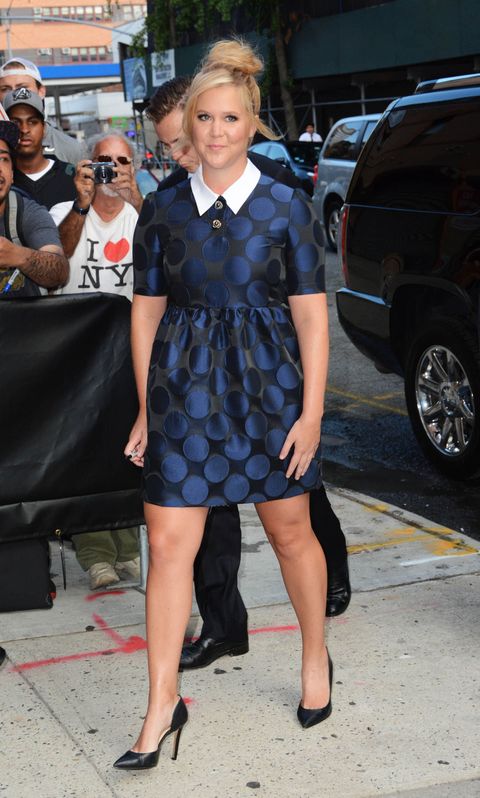 Last year, Amy Schumer and Amy Schumer's Friends from High School went to Martha's Vineyard for their annual vacation. They did something so unspeakable there that they were banned from the entire island, which is how Amy Schumer ended up summering in the Hamptons, where she and Jennifer Lawrence rode jet skis and made a human pyramid.

As one of Jon Stewart's last guests on the Daily Show, Schumer confirmed that her new friend JLaw really is "the coolest chick you'll ever meet" and that, even though she is wont to make chopstick tusks and draw Magic Marker mustaches on her face, it is still very hard to look photogenic next to a part-time Dior model.

"It's my picture next to Jennifer Lawrence's—like the last person you want to be next to," Schumer said. "And all the pictures we took of us, I look like her coach in all of the pictures. I look like I'm telling her to like take a knee. Like *starts talking in Colin Quinn's voice* LISTEN JEN."

Ugh. Can you just imagine the banter? The shenanigans? WAIT FOR ME, GUYS.

Chelsea Peng I'm Chelsea Peng, the assistant editor at MarieClaire.com.
This content is created and maintained by a third party, and imported onto this page to help users provide their email addresses. You may be able to find more information about this and similar content at piano.io
Advertisement - Continue Reading Below
More From Celebrity
40 Strict Rules the Royal Children Have to Follow
Megan Thee Stallion Stuns With Neon Pink Hair
Advertisement - Continue Reading Below
Phoebe and Pete Wore Matching Initial Necklaces
The Queen to Sit Alone at Prince Philip's Funeral
Royals Announce Who Will Attend Philip's Funeral
Prince Philip Will Not Have a State Funeral
Harry Doesn't Want Drama at Philip's Funeral
How Meghan Feels About Missing Philip's Funeral
Eva Longoria Loves Her Mini Trampoline
The Royals Won't Wear Uniform at Philip's Funeral