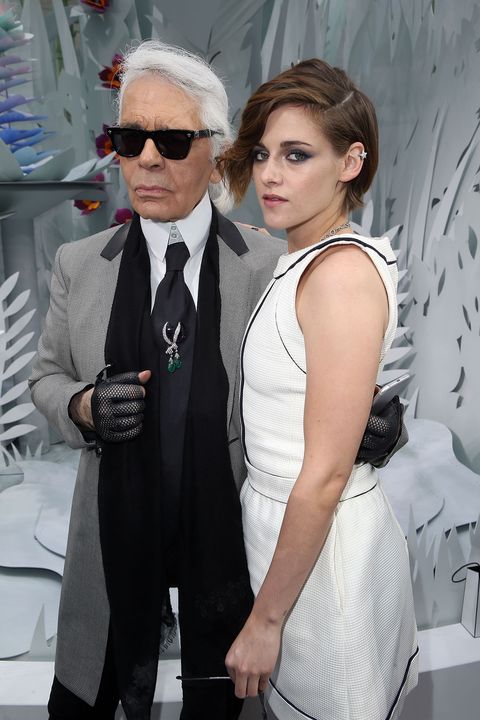 WWD reports that Stewart, who is an unequivocal Chanel darling (she's appeared in campaigns and often finds herself in front-row seats for shows), just wrapped a two-day shoot with Karl Lagerfeld. It's a fictional short film about Coco Chanel that centers around—and this is where it gets complicated—a "behind-the-scenes look" at a movie about her.

Stewart channels a "mean" Chanel—or as Lagerfeld states: "She's complaining about everything. She's mean with the director; mean with the producer." Geraldine Chaplin will also star, along with Harper's Bazaar editor Laura Brown (who will play an American journalist).

As for why? We'll let Lagerfeld take this one: "They make so many movies about Chanel, why can't I make one?" he said. And what Karl wants, Karl gets.

The film will premiere at Chanel's Métiers d'Arts show in Rome in December. Want a taste of what to expect? Here's the Coco Chanel film Lagerfeld premiered at last year's Métiers d'Arts:

This content is imported from YouTube. You may be able to find the same content in another format, or you may be able to find more information, at their web site.
Samantha Leal Senior Web Editor I'm Sam, the senior editor at MarieClaire.com.
This content is created and maintained by a third party, and imported onto this page to help users provide their email addresses. You may be able to find more information about this and similar content at piano.io
Advertisement - Continue Reading Below
More From Celebrity
The Queen's Hot Grandnephew Is a Thirst Trap
Watch Diana Play Impromptu Piano in Rare Clip
Advertisement - Continue Reading Below
Peek Inside the Cambridges' Country Home
Harry Is Heartbroken About His Family Situation
William and Harry Could Fight Over Diana's Legacy
William Reveals Which of His Kids Is the Cheekiest
Serena Williams's Daughter Is Taking After Mom
EmRata Opts for Faux Fur and Yeezy Boots
Rob Lowe: Prince Harry Is Rocking a Ponytail Now
Rihanna Stuns in $2 Million of Diamonds and Rubies