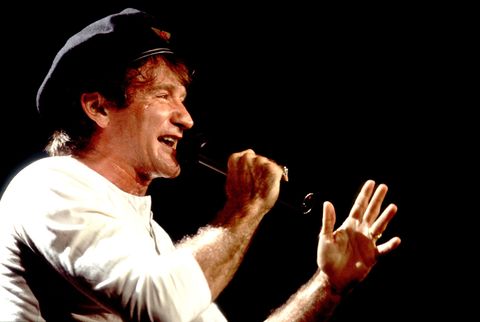 The cast of Aladdin reunited on Good Morning America on Friday to celebrate the digital re-release of the 1992 Disney classic. And of course, they paid tribute to one of the things that made the movie so eternally awesome—the comedic skills of the late great Robin Williams as Genie. During the broadcast, they revealed some never-before-seen clips that reminded us just how much magic he brought to the cartoon.

It's no wonder that screenwriters Ron Clements and John Musker wrote the part specifically for him.

"There was no one else that could be the Genie and fortunately he agreed to do it," Clements said on the show. "And he worked so hard. We recorded him in four hour sessions, and he would be going four hours straight…by the end he was just drenched. He had so much energy and so much passion."

Perhaps one of the reasons the Genie is still one of the most enduring roles in a long legacy of incredible parts is because Williams really was like the Genie: a little sad underneath a comedic facade, trying to break free, and giving all he had to the people around him as he did it.

"Aside from being funny as anything, he was such a warm person," animator Eric Goldberg said. "He was the Genie—it was bigger than life."

This content is created and maintained by a third party, and imported onto this page to help users provide their email addresses. You may be able to find more information about this and similar content at piano.io
Advertisement - Continue Reading Below
More From Celebrity
Why Isn't Archie Mountbatten-Windsor a Prince?
A Body Language Expert on the Oprah Interview
Advertisement - Continue Reading Below
See an Adorable New Sussex Maternity Shoot Photo
Why Is the Royal Family Called "The Firm?"
Read Serena Williams' Statement on Oprah Interview
The Internet Reacts to Meghan and Harry Interview
Prince Harry: The Queen Was Advised Not to See Me
The Palace Had Concerns About Archie's Skin
Harry Says Racism Was "A Large Part" Of Leaving
Stacey Abrams on Her Election Wins & What's Next