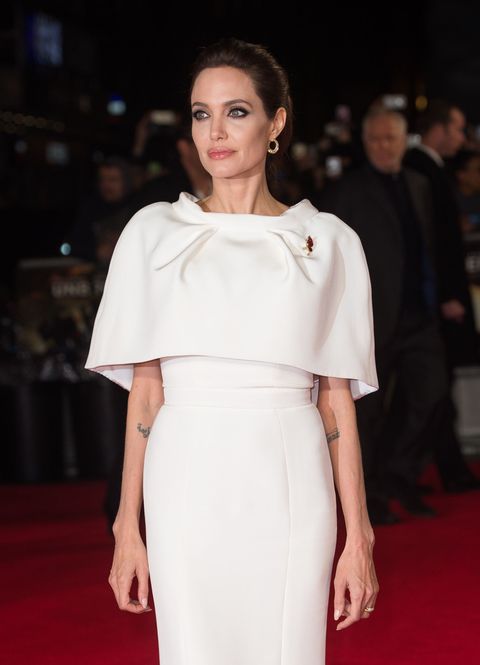 When you write a profile on Angelina Jolie, you don't even have to try because 1) she's Angelina Jolie and 2) everybody who's worked with her wants to tell you how Angelina Jolie-like she actually is.

Vogue's November cover story continues to support the legacy that is Saint AJ, while maintaining that the By the Sea director/actress/creative juggernaut has nothing left to prove except that she is real. Here, get the rundown of the interview, including problems in her and Brad's relationship, making it to 50 with a family history of cancer, and how she got a former Buddhist monk to redo her tramp stamp.

On her decision to go public with her preventative double mastectomy

She said sharing her story in a New York Times op-ed made her feel connected to other women, even though the "brutal" procedures and hormonal changes took a toll on her. "I feel grounded as a woman. I know others do too. Both of the women in my family, my mother and my grandmother"—who also succumbed to ovarian cancer—"started dying in their 40s. I'm 40. I can't wait to hit 50 and know I made it."

In summary, young, wild Angie had a tramp stamp shaped like a box. Then, after traveling to Cambodia to make Lara Croft: Tomb Raider and seeing the destruction there and wanting to do something about it, she had "a former Buddhist monk in Thailand tattoo a tiger over it."

ICYMI, BTS is about a truly beaten-down-by-life couple travel to a seaside hotel where they hit each other and cry a lot. (Just watch the trailer.) Angelina and Brad Pitt play the sad twosome, but she said it's no reflection on their marriage. (They only wanted to push themselves as artists, she also said.) "Brad and I have our issues, but if the characters' were even remotely close to our problems we couldn't have made the film."

Director Phillip Noyce was like, "We can just put a green screen up so it looks like you're up higher and you don't have to do anything dangerous." But Angie was like, "Nah." You can see why he called her "a conductor of ideas. They flow through her like electricity and emotion."

"I'm almost enjoying it more now that I see it as something I've been fortunate to be part of. Maybe in the next few years I'll finish being in front of the camera. I'll be happier behind it," she continues. "I'm happy to be home. I want to really focus on my children, doing the best I can to guide and protect them before they are out of the house. These are their most important years."