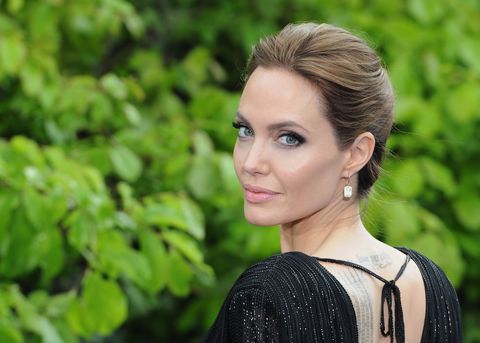 Just two years ago, Angelina Jolie openly shared her harrowing journey of undergoing a voluntary double mastectomy in the hopes that it would help other women going through—or considering—the same thing. A test had revealed that she carried a mutated gene that put her at 87 percent risk of breast cancer and 50 percent risk of ovarian cancer, and Jolie had already lost her grandmother, aunt, and mother to the disease.

But now, the mom of six has undergone another surgery: the removal of her fallopian tubes and ovaries, which she has written about for The New York Times.

Speaking candidly about the decision, the actress shares: "I had been planning this for some time. It is a less complex surgery than the mastectomy, but its effects are more severe. It puts a woman into forced menopause."

Last week, she underwent the procedure, but urged women to understand their own health and health risks—especially those with the same condition as her. "There is more than one way to deal with any health issue. The most important thing is to learn about the options and choose what is right for you personally," she writes.

The mother and wife, who lost her own mother at the age of 37, is hoping to spread the message that you alone have control over your body and health.

"Regardless of the hormone replacements I'm taking, I am now in menopause. I will not be able to have any more children, and I expect some physical changes. But I feel at ease with whatever will come, not because I am strong but because this is a part of life. It is nothing to be feared."

Angelina Jolie on Life After Her Double Mastectomy: "I'm Very Happy I Made the Decision"

Watch Angelina Jolie Give a Moving Speech About Sexual Violence

The "Angelina Effect" Doubled the Number of Breast-Cancer Gene Tests

Samantha Leal Senior Web Editor I'm Sam, the senior editor at MarieClaire.com.
This content is created and maintained by a third party, and imported onto this page to help users provide their email addresses. You may be able to find more information about this and similar content at piano.io
Advertisement - Continue Reading Below
More From Celebrity
Jennifer Aniston Answered Bizarre Fan Questions
Prince Charles "Really Wants to Meet" Lilibet
Advertisement - Continue Reading Below
Britney Spears Deleted Her Instagram Account
Megan Fox Won't Be Told "What a Woman Should Be"
Jennifer Garner Shared an Emotional Message on IG
Travis Scott Discussed His Parenting Style
Kanye West Unfollowed Kim Kardashian on Instagram
Kate Hudson Is Engaged to Danny Fujikawa
J.Lo & Ben Affleck Kiss in Masks at the Met Gala
Who Is Alexandria Ocasio-Cortez's Partner?