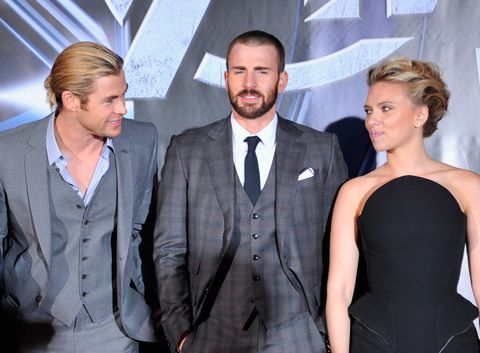 Celebrities like Jennifer Lawrence, Charlize Theron, and Kathy Griffin have all gone public with their struggle to get paid as much as men in the entertainment industry. But there's a teensy glimmer of hope for equal pay in Hollywood, and it wears a super suit.

Variety reports that Scarlett Johansson, who plays Black Widow in the Marvel movie universe, is making just as much money as Chris Hemsworth (Thor) and Chris Evans (Captain America). Though she's sadly not starring in her own Black Widow series, when it comes to the blockbuster Avengers movies, she's on equal terms with her two superhero costars. (Reports initially said she made more than them, but the Variety report says it was roughly equal.) Disney, which owns Marvel, is actively trying to boost women both in front of and behind the camera, and they have even hired Geena Davis as a gender equality consultant for their theme parks.

Though this is great news, she's not making nearly as much as her costar Robert Downey Jr. Forbes has ranked the Iron Man star as the highest paid actor in the world for three years in a row, and he pulled in a whopping $80 million this year alone. Johansson isn't exactly in the poorhouse, though; she was ranked second on Forbes' actresses list, making $35.5 million in the past year.

So sure, this is a battle between millionaires. But like Lawrence wrote in her viral Lenny essay, women everywhere have to deal with issues like this. "I don't think I've ever worked for a man in charge who spent time contemplating what angle he should use to have his voice heard," she wrote. And that goes for movie stars as well as the rest of us normal people.

This content is created and maintained by a third party, and imported onto this page to help users provide their email addresses. You may be able to find more information about this and similar content at piano.io
Advertisement - Continue Reading Below
More From Celebrity
The Palace Just Shared Prince Louis Birthday Pic
Meghan and Harry Talked Every Day During UK Trip
Advertisement - Continue Reading Below
J.Lo Wishes A-Rod's Daughter a Happy Birthday
Irina Shayk Shared a Rare Photo of Her Daughter
John Travolta Talked Dancing With Princess Diana
Meghan Markle and Archie Speak to the Queen
Who Is Alexandria Ocasio-Cortez's Partner?
Did Charles, Harry, and William Mend Relationship?
The Kardashians' Most Body-Confident Nude Shoots
Chrissy Teigen + Meghan Markle Spoke About Loss