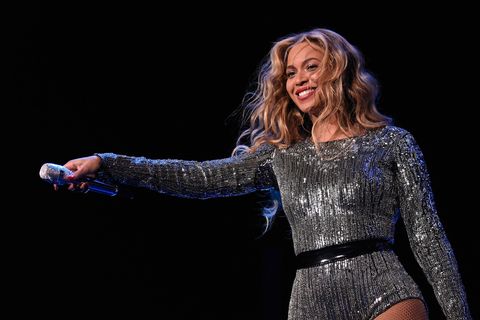 Hear that sound? It's Future Beyoncé, giving an Oscar speech. The multi-platinum singer has decided to get back into acting, and is reportedly on the hunt for a dramatic leading role. Makes sense, since she's already slayed the dramatic leading role that is her own life.

"She wants to land leading roles in movies and has been taking classes in New York and L.A. for the past year," a source tells Us Weekly.

Let's just take a moment of silence to absorb this, and throw up a couple of these. 🙌 🙌 🙌

Of course, this isn't Beyoncé's first time in a movie. She was nominated for a Golden Globe thanks to Dreamgirls, so it's not like she isn't already a pro. But the best part of this news? Bey isn't just here to win all the awards. She wants to make a difference. "Bey's looking for an iconic dramatic role," the source says. "She wants to make a film that's socially relevant to African American rights."

It's unclear when Bey will find a project to take on, but apparently she's "always being given scripts to read."

Mehera Bonner Contributor Mehera Bonner is a news writer who focuses on celebrities and royals.
This content is created and maintained by a third party, and imported onto this page to help users provide their email addresses. You may be able to find more information about this and similar content at piano.io
Advertisement - Continue Reading Below
More From Celebrity
What Happens on Katie's Season?
Jennifer Lopez Wears Old Bracelet From Ben Affleck
Advertisement - Continue Reading Below
Simone Biles Cheers on MyKayla Skinner
See the Royals Socialize at a 1991 Cocktail Party
Eugenie's Pics from Inside Harry and Meghan's Home
Queen Trolled Tourists Who Didn't Recognize Her
Blake and Ryan Recreated Their First Date on IG
Charles Expertly Ignored Boris Johnson's Snafu
How Kitty Spencer's Wedding Dress Honored Diana
Dolly Parton On the #FreeBritney Movement