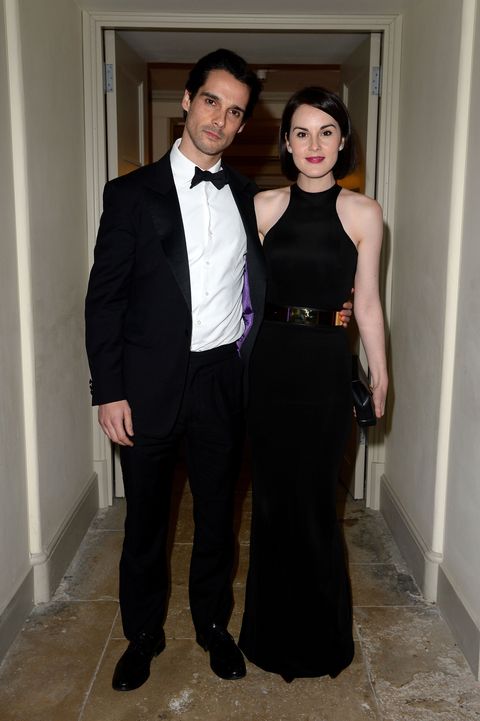 Downton Abbey star Michelle Dockery has lost her fiancé, who passed away at a heartbreakingly young age. John Dineen, an Irish public relations executive, died on Sunday at 34 years old from a rare form of cancer, People reports.

Dockery and Dineen started dating in 2013 after they were introduced by Allen Leech, who plays Tom Branson on Downton Abbey. They kept their relationship extremely private—the first time Dockery ever commented publicly was last year, when she said, "I have a wonderful man in my life from Ireland. […] That's all you need to know."

Later, in an interview with Red magazine, Dockery said she turned to Dineen for career tips. "I've got people around me who I can turn to for advice: my mum, and my partner, John," she said. "But, at this stage, my instincts are pretty good."

According to the Irish Independent, Dineen was working as a senior director at FTI Consulting in London when he was diagnosed, and then went back home to Cork, Ireland to be with his family; he also went to Germany for medical care. Dockery reportedly cut her Downton promotional tour short and was by his side in hospice this weekend when he passed away.

A funeral is reportedly being planned for Wednesday. Dockery's publicist released the following statement to ITV News: "The family is very grateful for the support and kindness they have received but would kindly request that they are left to grieve in private."

This content is created and maintained by a third party, and imported onto this page to help users provide their email addresses. You may be able to find more information about this and similar content at piano.io
Advertisement - Continue Reading Below
More From Celebrity
See the Royals Socialize at a 1991 Cocktail Party
Eugenie's Pics from Inside Harry and Meghan's Home
Advertisement - Continue Reading Below
Queen Trolled Tourists Who Didn't Recognize Her
Blake and Ryan Recreated Their First Date on IG
Charles Expertly Ignored Boris Johnson's Snafu
How Kitty Spencer's Wedding Dress Honored Diana
Dolly Parton On the #FreeBritney Movement
Will & Kate Are Nervous About George's Future
George Won't Be Forced to Go to Boarding School
Diana Would Have Written a Memoir Too, Friend Says