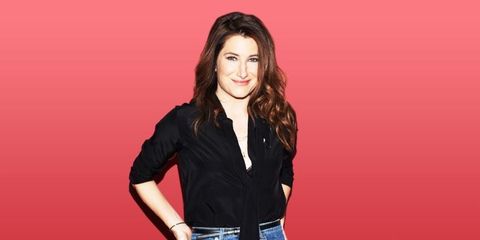 When Rabbi Raquel Fein is introduced in the middle of Transparent's first season, it's easy enough to pigeonhole her as the show's previously absent moral center. There's the fact that she's, you know, a rabbi, but there's also the grace and compassion Kathryn Hahn brings to Raquel. On a show about a family whose members seem to think constantly and only of themselves, she's a reminder of what generosity looks like, even if there are times when the Pfeffermans' uniform lack of self-awareness makes her appear all the more like the crazy one.

That's not to say Rabbi Raquel is perfect. In fact, she's one of the best "moral center" type characters on TV precisely because she's so good and so complicated at the same time. One of the show's (many) strengths is the thoughtful consideration it gives to its characters' flaws, and Hahn excels at portraying the complexities of Raquel, who is strong-willed but vulnerable, thoughtful but impulsive, honest but gentle—sometimes all at once.

Marie Claire talked to Hahn about moving away from "best friend" roles, being a mess, and her character's arc on Transparent's second season, which was released December 11th on Amazon. [Note: Spoilers ahead.]

Marie Claire: Raquel is this no bullshit independent woman who's also dealing with the reality of her ticking clock. How did you balance these two major parts of her?

Kathryn Hahn: What I love is that I don't think those things are separate from each other. She's a woman with a uterus and wants a baby in it, and that's who she is—I don't think she sees that as a liability. She has an amazing life. Her life's work is pretty radical and pretty– I would just call it an adventure. There are not very many woman rabbis. And so on top of that for her to be like, "And I want a child. I want to be a mother. I don't want to deny that part of myself in any way." That's also kind of radical. I don't think she's trying to reconcile it, or that she sees it as a weakness in any way. It really does suck that it's ticking. In season one, she talks about how she came very, very close with the wrong guy. Obviously it's a pattern. I wish there could be this kind of immaculate conception for Rabbi Raquel.

And so on top of that for her to be like, "And I want a child. I want to be a mother. I don't want to deny that part of myself in any way." That's also kind of radical.

MC: How did you prepare to play a rabbi?

KH: I met with Susan Goldberg, who is a rabbi and a friend of Jill Soloway's out here in Los Angeles. She's organizing a smaller kind of sect of Jews trying to find their own voice and community. It's a little bit outside of the twice-a-year temple goers, you know? I grew up Catholic, and I went to church on Christmas and Easter. My relationship with Catholicism was more dogmatic. I really have so enjoyed my relationship with her that it's awoken something in me, that I have the Book of Torah in my own life. I don't know if it's Judaism, but it is something I've been looking for, just in terms of cracking something open and asking questions again.

In terms of playing a rabbi, it was mostly just sitting and talking with her and asking a shit ton of questions. Just questions, questions, questions. I obviously could not become Jewish. I've been listening to the unbelievable, magnificent Jeffrey Tambor and how he approaches playing the beautiful Maura Pfefferman and the responsibility he felt approaching her, and I would never in any way claim to have a fraction of knowledge of what it would be to be a rabbi, but I think there was something in just spending time with Susan. She's got this incredible way of staring through you and seeing you and taking you in and listening to you. You just feel heard and seen, and that was kind of my way into Raquel. Susan is this incredibly grounded person, and Raquel is also rooted. Her roots go deep, deep, deep in a way that I feel like I am just blown into the ether. I try to be a humble student, and it's been the best thing I could possibly do. Sitting and reading by myself, that kind of intellectual looking at it, it's not actor-friendly, as helpful to get inside of it.

MC: You've played a fair amount of best friend type roles. What's it been like to play such a beloved character?

KH: I mean, it is incredibly humbling. It's also an incredibly new feeling for me to feel like the least messy person in the room. I myself feel like the most messy. And so I'm like, "Really? I kind of pulled the wool over their eyes." I always feel like a little bit of a mess. And so that's been a new feeling. I also feel like, as Raquel I'm also in love this person and have to love his family—bad decisions, good decisions, and all. Also, it's hard to hide your gut reaction to their decision-making. So Raquel is a kind of audience, a way in.

KH: Yes. I didn't really get to interact with the rest of the Pfeffermans as much in season two as in season one, but there had been this very tangible blood between them. You know, that she shared Pfefferman blood for a second, it was intense to see their lack of faith or integrity or their sense of responsibility to just...humanity. This family has a lot of work to do. A lot of work. They have no problem facing inward.

MC: Can I ask you about the scene where you propose to Josh? I had such a strong visceral reaction to it. You know exactly why Raquel is proposing, but I was sitting there squirming and thinking, "Don't do it!"

KH: Oh, I know. Even talking about that marriage at that point...at the beginning of the episode, there's such a very strange scene where they kind of are joking around about a proposal. Raquel has such forced blinders on, for survival. And everything's moving so fast with their relationship, like Colton's coming in, and I think she really thinks that the proposal is something she could take off Josh's plate, and that it would be a really beautiful and tender surprise. Something she could do for him, and she's a woman who would have no problem proposing. She wouldn't think twice about any sort of gender issue, she would of course propose to someone. But yeah, she realizes in the moment how little she does trust him. She doesn't trust him at all.

MC: How did you feel about their breakup?

KH: I mean, I think it was inevitable. I think—I mean, it sounds like a horrible thing to say, but—I really could not imagine, and I don't think Raquel could, that little sweetie in her belly as a child, isn't that a horrible thing to say? I couldn't imagine that baby ever growing up and being a person. I never really thought it was really happening. Like it was just this weird half-dream that they were in, and Colton kind of floated in and out of it. I think that she wasn't herself. It was really telling when she said how little she'd prayed since they'd been together. They're playing house in the most cliché way. She's trying to make something work, and Josh is trying to fulfill the role of a patriarch so badly.

She's trying to make something work, and Josh is trying to fulfill the role of a patriarch so badly.

I do feel like there is something connecting Raquel and Josh forever though. I don't think it's finished business. Their time has not matched up yet at all. She has so much work to do. He has so much work to do.  He's trying so hard to become a man. I think underneath all of that noise, our souls are perfect for each other, but there's so much growing up to do and so much learning. I don't know if we ever will be together. That connection is real though, and it's heartbreaking.

MC: What's it been like to be on this progressive show that's been so wildly successful?

KH: It's something I've never experienced. It's so surreal. I think any person involved would say that it still feels like we're putting on a small little show in a barn, that it still feels like we're doing some awesome, tiny public access show. And we're not, obviously we're not. The show's the real deal, and there's such extraordinary talent all over. It feels so strange, it really does. I'm most proud of the fact that it feels the same now as it did in season one. Walking into season two, the vibe was the same. We're just looking for the truth. And you know, there were no divas except Jeffrey Tambor—I'm kidding. Everybody's the best.

Lane Florsheim Features Editorial Assistant I'm the features editorial assistant at Marie Claire.
This content is created and maintained by a third party, and imported onto this page to help users provide their email addresses. You may be able to find more information about this and similar content at piano.io
Advertisement - Continue Reading Below
More From Celebrity
The Queen May Honor Kate Later This Year
Olivia Wilde & Harry Styles Keep It Profesh on Set
Advertisement - Continue Reading Below
Prince Harry on How Tabloid Attacks Changed Him
Watch Orlando and Katy After Her Performance
Kate Middleton Debuted Long, Straight Hair
Prince Harry's Surprise Inauguration Appearance
Chrissy Teigen Shared a Cute Tom Hanks Story
Gigi and Zayn Finally Reveal Their Daughter's Name
Rihanna Takes Out the Trash on Trump's Last Day
Chrissy Teigen Shared a Moving Post About Sobriety