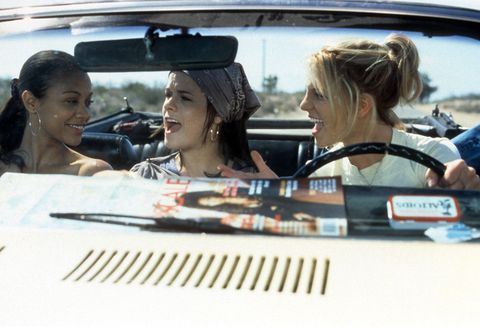 In a new interview with Broadly, Hollywood power women Shonda Rhimes, Ann Carli, and Tamra Davis open up about their experience working on Crossroads—yes, *that* Crossroads—and with the post-Mickey Mouse Club, pre-umbrella Britney Spears. In a weird nexus between flop and blockbuster—Crossroads made $61 million—the film seems to be a soft spot for many.

"It wasn't snarky. There's no snarkiness whatsoever. We weren't ashamed to be corny," Carli explains. "'Corny' would maybe have been someone else's judgment of it, but we weren't afraid to be heartfelt. We didn't need to be smarter than anybody else. Young women, they're surrounded by judgment and snarkiness, so it was important for us to show the ups and downs of real relationships."

For Rhimes, who penned the script and who has been lauded as a champion for diverse casts and writers, the number-one idea was that it felt real and authentic. "It wasn't that it was important to show people from diverse backgrounds—it just felt like the movie should look normal. Most movies didn't look normal, they all looked very oddly homogenous in a way that didn't feel realistic to me," she says.

"I don't think anyone at the time was looking at her—because it's such a misogynistic society—as a person."

As for writing for Spears? Rhimes wanted that to feel real, too. "I was much more interested in the young woman that I met than the image that people had of her. She was a person, and I don't think anyone at the time was looking at her—because it's such a misogynistic society—as a person," Rhimes recalls. "The idea that we could portray her as a three-dimensional young woman was interesting to me. To have mean-girled her and turned her into a caricature would have been a mistake."

While there are no current plans for a sequel (sorry, Brit Brit), the women behind the film are proud of their project and wouldn't mind doing another one.

"We've actually talked a little bit, in a weird way, about a sequel. There's a lot of people [involved], and they're really busy," Carli explains. "Who knows? I think it would be a lot of fun, but everybody's in different places, from Taryn to Zoe to Britney to Shonda."

Read the rest of the film's fascinating history over at Broadly.