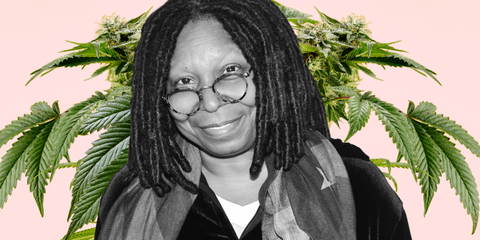 Whoopi Goldberg is rescuing us from period cramps one THC-infused tincture at a time. The EGOT winner (yeah, that's right) has teamed up with Om Edibles owner Maya Elisabeth to debut medical marijuana company Whoopi & Maya, which sells a line of raw sipping chocolates, topical rubs, tinctures, and bath soaks that are designed *specifically* to ease period cramps.

Believe it or not, medical marijuana designed to help women with menstrual cramps is uncharted territory. Somehow periods are still taboo despite the fact that half the population deals with them—Whoopi was initially told she'd be entering a niche market with her new business. Again: literally half the population, guys.

MarieClaire.com spoke with Whoopi about why this whole "niche market" thing is so off-base, the crazy legal obstacles she's facing, and how pot influences her politics. (Spoiler alert: She's so not here for Trump.)

"Unless you have a period, get out of the way, because you don't know what I'm talking about."

Marie Claire: How did you realize that period cramps weren't on the radar of the medical marijuana industry? It seems like such a huge gap in the market.

Whoopi Goldberg: Well, I suffered from cramps forever. And when I was talking to my friend Rick, who runs High Times Magazine, he was explaining to me about all the folks who are getting into the marijuana business and they seemed to all be men. I said, "So, is there a product out there that's for menstrual cramps?" And he said "Nobody's going to do it, it's a niche market." And that made my head explode.

MC: That's ridiculous, but I imagine it's a result of periods being taboo.

WG: It's thought of as a niche market because the people who are running it are pretty much all dudes, so they don't know anything about periods. If you had women running the weed market, I think there'd be lots of different products. I know periods. I know how horrible they are, and I know enough people who suffer from them that I really want to speak to them so they can carry something in their pocketbook for relief. Or come home, get in a tub, and soak with something that will actually work.

MC: For a soak to work, you have to have a pretty strong strain, right?

WG: Not necessarily. The reason I'm with Maya is because she knows what she's doing. I trust it because I've seen it. I've seen it work. It may not work for everybody, but I know it works on a whole bunch of folks, because for the last two years, that's what I've been doing. Giving it to friends. This isn't about getting you high. You can't smoke any of our products. Which is why they're good for everybody. Young women who have just discovered that they have horrible periods, this won't hurt them.

"These are not smokeable, they will not get you high, you don't have to be afraid."

MC: So none of the products get you high?

WG: We have CBD products and we have THC products, and it's very clearly labelled. The THC is stronger because that has the marijuana in it. But none of them get you high. These are not smokeable, they will not get you high, you don't have to be afraid if you're not a person who has dealt with marijuana. You don't have to worry about that. That's not what this is about.

MC: Like you said, young women often have the worst cramps. But I can't imagine it's easy for someone under the age of 21 to get access to medical marijuana.

WG: The government has to help with that. It's not legal in every state, and you can't send it anywhere. The federal laws prohibit that. So, if you're in California, and you've heard about the product, you'd have to get your mom, or your dad, or somebody with a card to get it so you could try it. It's terrible. And until the federal government comes clean with how they've classified things, this is going to be an issue. I would love to say, "Hey, state of New York, why don't you add this to your list of things you can go to the dispensary for." But they're very restrictive.

MC: Have you faced many legal obstacles?

WG: In order to sell in all the different places where medical marijuana is legal, you have to build a facility and grow in the state you're selling in, so it's daunting. We're not a big money company. Would it be great if somebody came in and infused us with a lot of money? It would be, as long as they allowed us to continue to do what we're doing. In order to be in Colorado, Nevada, or Oregon, you have to have money to start up the company, then get the lease, and the license. It's like, come on.

MC: Speaking of the government, has getting into this business impacted the way you're going to vote?

WG: No. What's impacted the way I'm going to vote is the fact that I just need somebody who's not going to be telling me that everybody I see needs to go away. When you hear the ex-politician tell you that the reason they created the War on Drugs was to get black people and to get hippies...that to me is just as shitty as saying all Mexicans are murderers and rapists. Or all Muslims. That's what I'm paying attention to. And everybody is hedging their bets when it comes to marijuana. The government is sitting on this lie saying it's a gateway drug. No, it's not a gateway drug. You guys classified it for a bullshit reason, pardon my French. So I'm waiting for the government to say, "Maybe we need to make a shift."

MC: Is that why you decided the products shouldn't get people high? To protect yourself from people claiming medical marijuana is an excuse to use drugs?

WG: Yeah, basically. I don't care if somebody wants to go get stoned. To me, it's like somebody going to get a martini. But if somebody is saying to me, 'Well, you can't give this to kids because you're trying to get them high," it's like no, no, no, no. Our product has nothing to do with getting high. This has to do with pain relief. Unless you have a period, get out of the way, because you don't know what I'm talking about.

MC: Are you going to eventually try to expand the market to include products for men?

WG: I want to get the women and mothers on board first. And once I do that, once we are able to say to mothers, "You see, we're exactly what we say we are," then we can say, "Hey, we'd like to introduce something else."

MC: I feel like this product could also be a relief for women who deal with uterine cramping after IUD insertion, vaginal birth, etc. There's a whole market for female-unique pain that goes beyond just period cramps.

WG: Well, that's what the soaks are for. You can do that now with the soaks. You could utilize them for relief in the vaginal area, in the lower back area, that's what it's for. It's for pain relief and muscle relief.

MC: When did you realize that marijuana was a pain reliever for you? Was there an a-ha moment?

WG: I had gone through several crazy headache bouts, and I realized that part of the reason I was having them was because I wasn't smoking marijuana. When my daughter gave me a vape pen, I realized that I could relegate it to where I needed it to be. And I would talk to my older grandkids in their 20s, and they'd say they use weed to stop cramps. That's when I really started to investigate and asked the question, "Is anybody doing this?" And they gave me that horrifying answer: "niche market."

If you're in California, head over here to buy Whoopi & Maya.