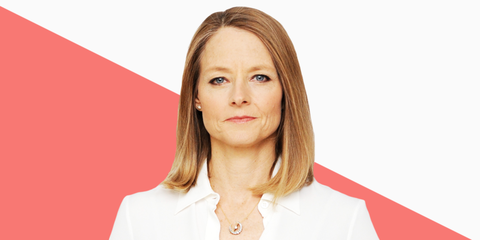 Gender diversity in Hollywood is a problem with a very obvious solution: Hire more women. More specifically, hire more women like Jodie Foster, because she's proof that great movies are great whether or not they're helmed by men.

The Oscar winning actress/director started breaking down boundaries long before terms like "Hollywood wage gap" became buzz-worthy, and her new film, Money Monster—about a Mad Money-style host who's taken hostage—is proof of what she's capable of.

We spoke to Foster about why being a "female director" doesn't define her, how social media has changed the lives of actors, and—of course—what it was like working with George Clooney and Julia Roberts.

Marie Claire: I felt like this film had a strong political message, was that intentional?

Jodie Foster: I don't know if the film is that political, so I'm not sure I agree with that. Obviously, the backdrop is the financial world, technology, media, and our relationships with them. But that's just the backdrop. I think the film dramatizes its point of view through character, and in a way, that's probably the best kind of socially impactful movie—the kind that lets the audience draw its own conclusions and lets the audience connect the dots. Everyone is represented in Money Monster. The right side of the aisle, the left side of the aisle, everyone has a point of view including the bad guy, and that allows the audience to draw their own conclusions.

MC: When picking projects, do you feel a social responsibility as well as an artistic one?

JF: In terms of social relevance, you have a responsibility to your characters. You have a responsibility to be really truthful and honest, and to say it like you see it. My feeling is if you start anticipating responses, or trying to manipulate your message, you just fall flat on your face. You just have to tell your story, and then hope whatever message in the movie comes out of that.

"I do feel like we get a little ripped off—women and men—because we're asked to only live in one experience."

MC: Clooney and Roberts play friends/co-workers as opposed to romantic partners. Did you consider the possibility that the viewer might project their memories of the duo's romantic dynamic from other films?

JF: I do think that their prior relationships on film really worked in our favor. They're only on screen together for one minute in the beginning of the movie and one minute at the end. So we had to establish this life-long friendship and professional relationship very quickly. That's something that you can only do with the two of them. They're never in the same room, so they have this virtual relationship in the film—you needed for there to be some weird chemistry that only George and Julia have. But you're right, I think the audience does carry their own memories.

MC: You must have spent this entire round of promotional interviews asked about the wage gap and gender diversity. Is this a question you get tired of, or do you think the issue is important enough that it bears repeating again and again?

JF: The issue is terribly important. There is a bit of discussion going around about it, but I wish the discussion was complex because the issue is complicated.

MC: I feel like a lot of female directors are asked about directing "as a woman," or what they can bring to the table that male directors can't. Is it a valid question, or is it sexist to create a divide based on gender?

JF: All of your life experiences bear on your directing style, and on your leadership style, and on your point of view. The fact that I was raised by a single mom, or that I love the Green Bay Packers—all those things have a relevance to my work. So, I don't think it's an unfair question. But I do feel like we get a little ripped off—women and men—because we're asked to only live in one experience, and one expectation of that experience. Jonathan Demme, for example, is one of the most maternal directors I've ever worked with. He's the most interested in personal relationship stories, he's incredibly nurturing, and he's the first person I would go to if I was finding a director for a feminist movie. You don't have to be a woman to be able to understand or express the female experience. And the reverse is true, as well. Kathryn Bigelow's The Hurt Locker is an extraordinary movie and examination of men's relationships with each other in a really complex way. That being said, yeah, I've lived a different life because I'm a woman.

"I've lived a different life because I'm a woman."

MC: The new generation of actors are starring in their own mini reality shows thanks to social media. If you had come up in this business as a child actor during this time, how would you have handled it?

JF: It's changed everything. I can't know who I might have been had I been raised in a different era. I can't even imagine it. But this new generation doesn't have the same expectations for their lives as we did, because they were raised in a different generation. My children will go to college and there's going to be pictures of them in high school that people in college can access. They can't really reinvent themselves or become new. And that's what they expect because they don't know anything else. They expect to have their past travel along with them wherever they go.

MC: The inability to reinvent without a trace seems like it could be a limitation to actresses and actors.

JF: Yeah, that's true. Look, technology has done great things and this film really explores the idea that technology is this double-edged sword. All this connectivity is a really good thing, because it allows a kind of democratization, and for injustices to be righted by the community. But the bad part of technology is it's faster than we are. We created it but we don't control it.

Mehera Bonner Contributor Mehera Bonner is a news writer who focuses on celebrities and royals.
This content is created and maintained by a third party, and imported onto this page to help users provide their email addresses. You may be able to find more information about this and similar content at piano.io
Advertisement - Continue Reading Below
More From Celebrity
Travis Shared PDA-Heavy Bday Tribute to Kourtney
How the Queen Ends Awkwardly-Long Handshakes
Advertisement - Continue Reading Below
The Queen Has a Rule Against Bad Talking Family
The Queen Took a Pic of Philip With Her to Funeral
The Queen's Tolerance Was the Key to Her Marriage
J.Lo "Likes" Shady IG Post After A-Rod Split 👀
Beyoncé Shares Photos of Her White Power Suit
Will & Kate Welcomed Harry Back Into Their Group
Queen Left a Handwritten Note on Philip's Coffin
The Queen Said Grief Is the Price We Pay for Love