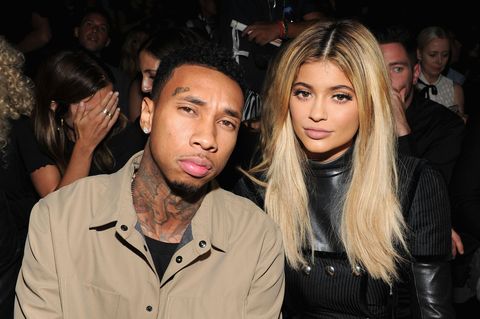 Tyga just admitted that he felt "overshadowed" in his relationship with Kylie Jenner, and we have no words—only eye-rolls. So, let's let him do the talking for now, mmmkay?

"When you're in a very public relationship like that, it's hard for other people to see you differently than that," the rapper recently mused. "Being in that, it took a lot, career-wise, everything. It overshadowed a lot of my talents and a lot of things that I worked hard for."

Okay, to be fair, Tyga's talking about the relationship itself overshadowing his talents and not Kylie specifically. But let's call a spade a spade: it sounds like Tyga wasn't cool with Kylie's monumental success overriding his own. That said, there's no animosity between them:

"It got to the point where it was like, 'I respect you, you respect me,'" he said. "When something is so damaged or something is just not right, you can't fix it in a moment. The only thing is time."

That's kind of sweet, but Tyga shading Kylie for being immature is the exact opposite (after all, he didn't care about her age a few months ago):

"Maybe later on in life, maybe we might come back," he continued. "She's young. When you're young, you're going to make mistakes. All of those mistakes are going to be in the public eye so that puts a lot of strain on the relationship. Right now, I want to focus on what I need to do. I just wanted to get back to just me. I think for her as well."

Huh, okay. Not sure about this whole "Tyga is a wise adult and Kylie is a foolish youth" narrative, but nothing says maturity like talking about one's breakup to the media, that's for sure!