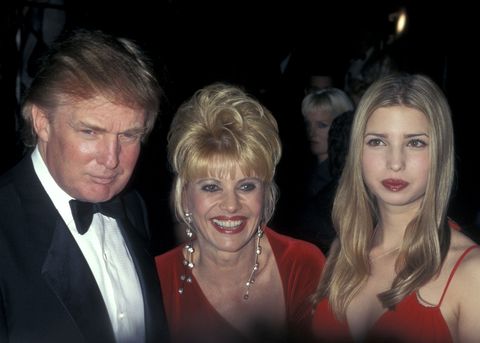 Donald and Ivana Trump's divorce was the epitome of '90s drama thanks to Donald's affair with Marla Maples, and Ivana's notorious confrontation with her on a ski slope. But between the epic court battle and constant tabloid fodder, the Trumps managed to put their children, Ivanka, Donald Jr., and Eric, before everything else. Donald and Ivana even went so far as to remove newspapers from the house and keep their kids away from the television.

"They did a remarkable job protecting us from something largely outside of their control," Ivanka told People. "We didn't have newspapers in the house for a significant period of time and the TV wasn't on when they weren't there. So they tried to mitigate the attention that that moment received."

While Donald and Ivana's divorce seemed acrimonious, Ivanka says they never fought in front of their children—which went a long way to preserve their family unit.

"Really the way in which they helped us the most was by being supportive with one another, not disparaging the other in front of us, recognizing that and communicating that there was still tremendous affection between them and that there would always be great love for us," she said. "And I think in retrospect, I became closer with both of my parents because I was at that stage in life where you do take your parents for granted and something like that happens and maybe you stop taking them for granted as much. They made a real effort to ensure that we knew that they would always be there for us and accessible to us and it helped us through a difficult time."

So, highly controversial presidential campaign aside, guess we can take comfort in the fact that Donald Trump is a good dad, right? Guys?!