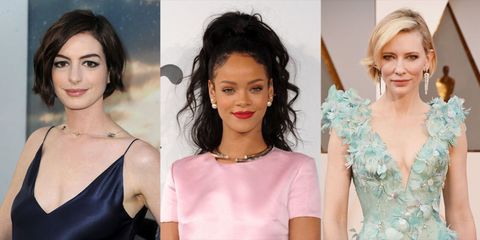 If you weren't aware of this already, Warner Bros. is currently working on an all-female remake of one of the most man-centric films ever: Oceans Eleven. And now, The Hollywood Reporter has learned that Oceans Ocho, as the film will be called, has filled seven of the eight leading roles. The cast could not be made of a more diverse and talented group of women. We've got:

Seriously—what a time to be alive.

Ocean's Eleven director Steven Soderbergh will be producing the film, and Gary Ross (The Hunger Games, Seabiscuit, Pleasantville) will be directing. The screenplay was written by Ross and Olivia Milch (Queen & Country, Little Women), and the film is set to begin shooting in October in New York.

Now, the only question is—who's going to be the 8th cast member?

Please let it be Beyoncé. 🙏

This content is created and maintained by a third party, and imported onto this page to help users provide their email addresses. You may be able to find more information about this and similar content at piano.io
Advertisement - Continue Reading Below
More From Celebrity
Gigi Hadid's Mom Shared Sweet Pics of Khai
Kate & Will Probably Won't Have a Fourth Child
Advertisement - Continue Reading Below
Ben & Jen Plan to Spend the Holidays Together
Kate & Will Are "Anxious" About Harry & Meghan
Mandy Moore Calls Breast Pump Emmy's MVP Accessory
Royal Nanny to Get Damages from Interview Scandal
Prince William and Kate Will Focus on Work in 2022
Kate Middleton Shares Prince Louis's First Words
Prince Charles Shares Final Exchange With Philip
William and Kate's Children Just Love Airplanes