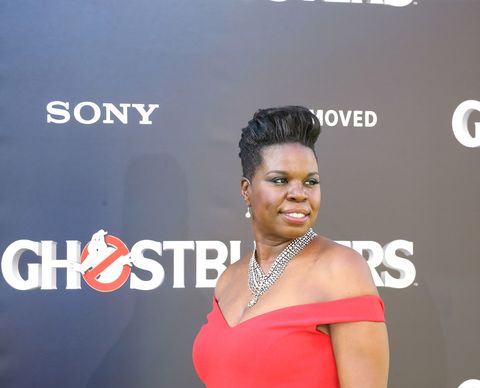 Ghostbusters and Saturday Night Live star Leslie Jones has been the target of some horrific abuse online, especially from dudes who couldn't handle an all-female Ghostbusters reboot. She briefly left Twitter because the racist and sexist comments got so bad. And now, fresh from a commentary stint at the Olympics that won the hearts of basically everyone, she is yet again the target of an attack online.

TMZ reports that a hacker got into her website and personal accounts, and posted sexually explicit photos of Jones on the website, along with personal information like her passport and driver's license. The hacker even posted a video of Harambe the gorilla next to all that private information. Jones' website, JustLeslie.com, was taken down after the attack.

According to the New York Times, the hacker posted photos of Jones hanging out with fellow celebrities, including Rihanna, Kanye West, and Kim Kardashian. Jones has not publicly commented on the hack, and there was no way to independently confirm whether the photos were indeed of Jones or if the personal information was accurate.

Jones had recently started an online campaign to boost Gabby Douglas after the Olympic gymnast received her share of awful comments online, too. Colleagues and fans have rallied behind her online, of course, because Leslie Jones doesn't deserve this constant harassment just for being herself. Nobody does.

What's happening to @Lesdoggg is an absolute outrage. Alt right, haters, trolls, "comedians," whoever the fuck you all are, you're just sad.

these acts against leslie jones....are sickening. its racist & sexist. it's disgusting. this is hate crimes. this aint "kids joshing round"

Why on earth? Such venom. I'm so sorry @Lesdoggg. It's misplaced sadness and anger and you don't deserve any of it. https://t.co/YvseMovx3K

I honestly don't understand why people mess with Leslie Jones. She's a good person with a kind soul. Leave her be. @Lesdoggg #Truth #sad

Can Leslie Jones and everyone else who isn't a cisgender, hetero white dude just live on the internet? Fuck. https://t.co/PINwcZfWho

Leslie Jones just spent 2 weeks cheering on American athletes of all genders, races, sexualities, and religions... and comes back to this.