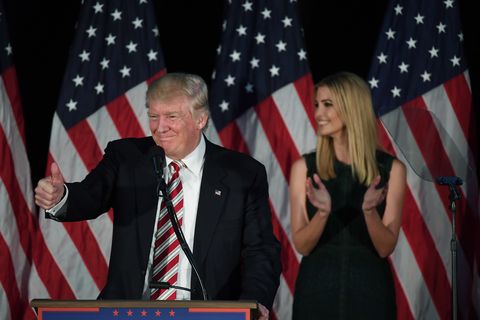 "We need working mothers to be fairly compensated for their work, and to have access to affordable, quality child care for their kids," Trump said, while his daughter Ivanka Trump (who influenced the policy) explained. "As a society we need to create policies that champion all parents, enabling the American family to thrive."

Trump held up this small child while delivering the news, which...okay, sure.

While Hillary offers more time off than Trump (12 weeks, to be exact), she's also offering leave to both mothers and fathers. "We're not living in a Mad Men era anymore where only women are taking care of infants," policy advisor Maya Harris said. "It's just completely unserious. While his plan would undercut women in the workplace, it also provides no relief to working families."

Meanwhile, Ivanka criticized Clinton for not enacting better childcare policies during her time in public office, telling Good Morning America, "Respectfully, Clinton has been around for decades and there's no policy benefiting either mothers or fathers in terms of paid leave. Certainly she had opportunity to have a concept like that in the past. We have not been in public office for the last several decades and she has, so she could have instituted some of those policies in that role and has not done so."

Mehera Bonner Contributor Mehera Bonner is a news writer who focuses on celebrities and royals.
This content is created and maintained by a third party, and imported onto this page to help users provide their email addresses. You may be able to find more information about this and similar content at piano.io
Advertisement - Continue Reading Below
More From Celebrity
Who Is Alexandria Ocasio-Cortez's Partner?
Did Charles, Harry, and William Mend Relationship?
Advertisement - Continue Reading Below
The Kardashians' Most Body-Confident Nude Shoots
Chrissy Teigen + Meghan Markle Spoke About Loss
Prince Harry Is Back in Cali With Meghan
Lizzo Just Shared an Unedited Naked Selfie
Queen Elizabeth's Stationery Breaks Tradition
The Queen Shares an Emotional Birthday Message
Chloe From 'Too Hot to Handle' Is in 'The Circle'
Comparing the Two Biggest Royal Weddings