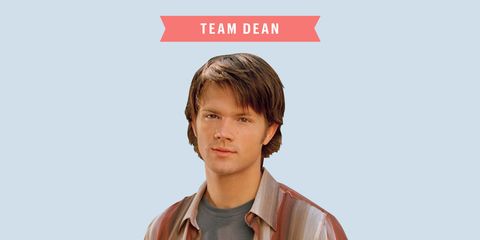 For reasons that are best described as "UGH," and "he sucks," and "can you not?" the internet seems to hate Dean from Gilmore Girls. You know, Dean? Dean Forester? That's right, he has a last name.

And I get it. I, too, once hated Dean. He is the literal definition of "nope." He is so thirsty that it's a miracle he isn't dead from being parched. But he's also so much better than Rory Gilmore's other boyfriends.

I'm here to argue that this labrador of a human isn't so bad—minus the fact that he wore a stained shirt during the above promotional photo shoot. It's time to support the third party candidate that is Dean Forester so we can Make Stars Hollow Basic Again. And in the very likely event that you are currently horrified and need convincing, I set forth my case:

Unique, like his taste in man-bangs. No, Dean never wrote adorable marginalia in Rory's books (related question: does Dean know how to read?), but he was super supportive. Look:

Dean was *so pumped* to chill with Rory's mom.

Does your significant other spend hours of his free-time hanging with your mom? Probably not, because it would be weird, but Dean didn't care about weird. Dean lived for weird. HE LIVED FOR IT.

Dean was his authentic self.

He was basic AF and he knew it. He didn't need a motorcycle jacket to be cool. He was experimenting in the wonderful world of norm-core. And unlike Logan, he didn't need money to impress Rory. He just built her a car with his own two hands.

^Meanwhile, this is the only thing Jess can accomplish with his hands.

Did Jess ever sit down with Rory and watch The Donna Reed Show? No, he was too busy "writing" "a" "novel." Meanwhile, Logan was too focused on Scrooge McDucking his way down a pile of money to even know who the Donna Reed was.

^ This is Donna Reed, Logan. Not that you even care.

Dean dealt with a ton of elitism.

Remember when Rory's grandparents invited Dean over and made him feel terrible for being middle-class? Dating the 1% is hard, and let's not pretend that Rory didn't enjoy a ton of privilege from her wealthy background. (Side note: Dean also enjoyed plenty of privilege from being a white male in Connecticut, but still.)

On that note, Dean actually had a job and understood the value of work.

Also, remember when Rory and Dean went to the school dance and Dean screamed at Tristan during one of his Dean Rage Sessions™? On the surface it might seem like he was suffering from a total lack of chill, but maybe he was just a regular kid doing his best to keep afloat in a sea of ascot-wearing prep schoolers.

When Rory asked if Dean was her boyfriend, he said "if you want me to be." Feminism! And sure, Dean was clingy when Jess showed up in Stars Hollow with a bag full o' emo—but as soon as Lorelai told Dean to give his gal some space, he did. And honestly, what would you do if your girlfriend started hanging with this living, breathing LiveJournal entry come-to-life?

And finally, the elephant in the room....

Dean cheated on his wife with Rory, which yes, is awful. The man is not perfect—his bangs prove that. But lest you forget, Logan got with another lady while he and Rory were "on a break" (AKA cheated, depending on who you ask), and if you think about it hard enough, Jess was probably mentally cheating on her with some combination of Allen Ginsberg, Amélie from Amélie, and Montgomery Cliff.

FYI, Netflix's Gilmore Girls revival drops in November, so it's not too late to join me on this crusade and change your vote. Dean for president of Rory's heart, tbh. Especially since the other candidates currently dress like this: